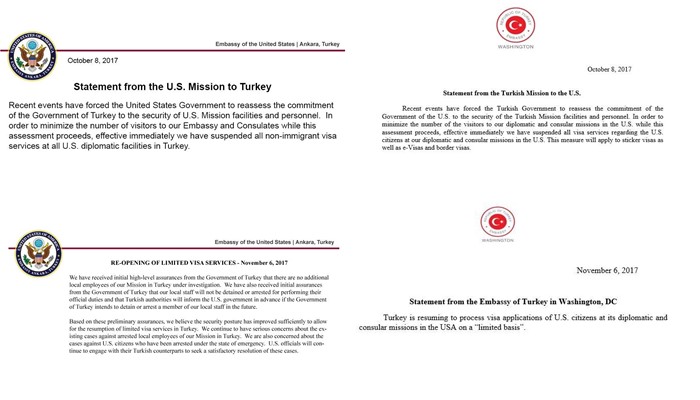 Minutes after the United States resumed processing visas at its missions in Turkey on a “limited” basis, Turkey announced the resumption of visa issuance at its missions in the US on Monday in what could signal a tentative improvement in the ongoing diplomatic crisis between the two countries.

“Turkey is resuming processing visa applications of US citizens at its diplomatic and consular missions in the US on a ‘limited basis’,” the Turkish Embassy in Washington announced on Twitter.

The Turkish statement came minutes after an announcement by the US Embassy in Ankara:

“Based on these preliminary assurances, we believe the security posture has improved sufficiently to allow for the resumption of limited visa services in Turkey.  We continue to have serious concerns about the existing cases against arrested local employees of our Mission in Turkey. We are also concerned about the cases against U.S. citizens who have been arrested under the state of emergency. U.S. officials will continue to engage with their Turkish counterparts to seek a satisfactory resolution of these cases.”

On Oct. 8, the US and Turkey halted non-immigrant visa services in their respective missions after Metin Topuz, a staff member at the US Consulate General in İstanbul, was arrested on Oct. 4 on espionage charges and alleged links to some leading members of the faith-based Gülen movement.

“Recent events have forced the United States Government to reassess the commitment of the Government of Turkey to the security of US Mission facilities and personnel. In order to minimize the number of visitors to our Embassy and Consulates while this assessment proceeds, effective immediately we have suspended all non-immigrant visa services at all U.S. diplomatic facilities in Turkey,” the US Embassy announced on Oct. 8

The Turkish Embassy in Washington retaliated by copying and reversing the US statement.

“This measure will apply to visas in passports as well as e-Visas and visas acquired at the border,” the Turkish Embassy added in its statement.

The Turkish Embassy on Monday did not copy and reverse the US statement, referring only to a “limited basis” in visa issuance.