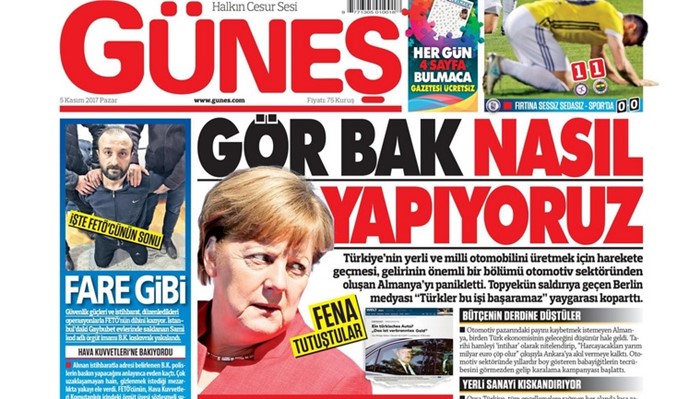 The Güneş daily, a staunch supporter of the Turkish government, on Sunday said Turkey’s steps towards producing its first domestically made car have scared Germany, along with other big projects such as a third airport in Istanbul.

“Germany fears that the Turkish car, which is planned to be on the road in 2019, will threaten its control of the market,” the newspaper wrote, claiming that Berlin has already started a smear campaign against the Turkish car: “Got into a flap, Merkel’s government has pushed the button to activate the media for perception operations.”

Speaking during the ceremony for first domestically made car, Turkish President Recep Tayyip Erdoğan said he expected the car’s prototype to be ready in 2019 and for sales to start in 2021.

Erdoğan also declared himself the first customer. “I want to own the first such automobile, and I will pay for it,” he said.