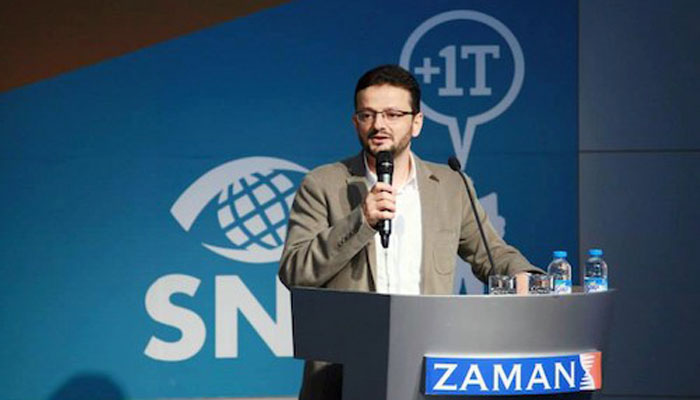 Fevzi Yazıcı, a Turkish member of the US-based international Society for News Design (SND) who was imprisoned last year as part of a government crackdown on the media following a July 2016 coup attempt in Turkey, sent a letter to the SND community through his wife, who recently visited him in prison, the SND website reported on Friday.

The designer’s letter was emotional, underlining his harshly restricted living conditions in prison for a crime he denies having anything to do with.

“I’m calling you from a shrunken small world. I realize and miss everything little thing I took for granted… I am here in prison because of a crime I am accused of that I didn’t do or take part in. I am really having a difficult time to the find words to tell you the situation I am in. Thick walls were built between me and life! Almost I cannot breathe… I missed my family, my two sons, I missed my friends, I missed drawing and designing, I mean I missed my life that was taken away from me unexpectedly one morning suddenly.

“But through all that struggle I am sending this message with feelings of peace that I am innocent! And I am living a life by the longing to meet you again, sooner rather than later.

“My country is passing through hard days and I believe the solution will come from above. It gives me great comfort to know that even these horrific days will pass and in the near future especially for my two sons, they will be honored by their dad and even my country, too.

“SND has an important part in my life. For years I was honored to have work there representing my country. I am hopeful that when I get my freedom, I will work more determinedly for design, for the country, for the world to make it better through this experience.

“Thank you for all your support and prayers… hope to see you soon.

According to the report, Yazıcı is one of 30 Zaman journalists facing life sentences for alleged links to the coup. He attended many SND workshops – most recently SND San Francisco, where he spoke at the closing banquet about the issues facing his country, which imprisons more journalists than any other nation.

Following the failed coup of July 15, 2016, from Aug. 31 to Sept. 2, an international delegation of civil society organizations visited Istanbul to demonstrate solidarity with writers, journalists and media outlets in Turkey. International civil society organizations have condemned the Turkish government for abusing an ongoing state of emergency in the country to suppress freedom of expression and have called on the government to immediately and unconditionally release all journalists detained without evidence and to cease its harassment of the few remaining independent and opposition media outlets.

Human rights advocacy group Amnesty International has called on Turkish authorities to put an end to an ongoing media crackdown in the country and to free the journalists held in Turkey’s prisons.

“Turkey now jails more journalists than any other country. One third of all imprisoned journalists in the world are being held in Turkish prisons, the vast majority waiting to be brought to trial. Journalists and media workers from all strands of opposition media have been targeted in an unprecedented crackdown since the violent coup attempt in July 2016. Coupled with the closure of more than 160 media outlets, the message is clear and disturbing: the space for dissent is ever-shrinking and speaking out comes at an immeasurable cost,” Amnesty said in statement on Friday.

The Justice and Development Party (AKP) government has increasingly tightened its grip over journalists and media outlets since a failed coup on July 15 that killed 249 people and injured a thousand more. According to a report published on Jan. 26 by advocacy group the Stockholm Center for Freedom (SCF), 191 journalists are in jail, 92 are wanted and 839 have been charged in Turkey. Other sources put the number of jailed journalists at 149.

The government accuses the faith-based Gülen movement of masterminding the July 15 coup attempt, attempting to overthrow the government by means of corruption probes in 2013, helping Moody’s downgrade Turkey’s sovereign credit rating, downing a Russian warplane and causing the breakdown of a peace process with the Kurds and many other similar wrongdoings.

The movement denies all allegations