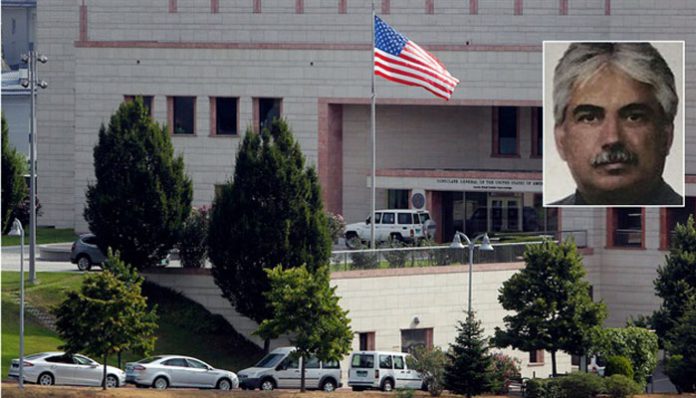 Although US authorities had sent a diplomatic note to Turkey on Oct. 10 demanding the return of the seized mobile phone of Metin Topuz, a Turkish employee of the US Consulate General in İstanbul who was arrested on Oct. 4 on espionage charges, Turkish police have broken the password of Topuz’s phone, finding messages about media reports on the arrest of Turkish-Iranian businessman Reza Zarrab in the US.

According to a report in the Hürriyet Daily News, upon the instruction of the İstanbul Chief Public Prosecutor’s Office, the cyber-crimes unit discovered WhatsApp group messages between Topuz and a US Consulate staff member identified only as K. sharing reports on Zarrab, who had been arrested in the US for evading American sanctions on Iran.

Topuz reportedly created a WhatsApp group conversation on March 22, 2016 titled “Reza Zarrab” at 8:51 a.m. and shared a report by Hürriyet on the arrest of Zarrab in Miami in his first message sent at 9:02 a.m.

At 9:25 a.m., another US Consulate staff member joined the conversation. Topuz wrote that Zarrab’s arrest was part of an FBI investigation and that they would accordingly try to obtain information about companies in Turkey. The messages have been included in the investigation file.

The consulate staff member said the case would be difficult due to political links and that there was a possibility of adding a Dubai element to the case.

The US had sent a diplomatic note to Turkey after Topuz was arrested on Oct. 4 and demanded the return of his mobile phone seized by Turkish authorities. Washington had stated that the phone belonged to the US and that any information on the mobile phone and its SIM card were within the immunity of the consulate archive and documents.

Turkish President Recep Tayyip Erdoğan on Tuesday reacted to the US demand for the Topuz’s mobile phone: “Alleging diplomatic immunity, the US tries to claim his [Topuz’s] mobile. This is not the case, who are they trying to kid.”

Topuz, an employee of the US Consulate in İstanbul, was detained on Sept. 25 and arrested on Oct. 4 on espionage charges, prompting a diplomatic crisis between Washington and Ankara. Topuz’s arrest led Washington to suspend all non-immigrant visa services at diplomatic missions in Turkey, which was immediately followed by a reciprocal move by the Turkish Embassy in Washington to suspend visa applications from the US on Oct. 8.

Turkey accuses Topuz of links to police officers who are sympathizers of the Gülen movement, which is blamed by Turkish authorities for a failed coup last year.

US Secretary of State Rex Tillerson had waited for three days before calling his Turkish counterpart, Mevlüt Çavuşoğlu, in response to a message sent by Çavuşoğlu regarding the visa crisis.

US Ambassador Bass said in a video message released late on Oct. 9 that Turkish authorities had failed to show any evidence against Topuz and that he had insufficient access to a lawyer. He also said the arrest “raised questions whether the goal of some officials is to disrupt the long-standing cooperation between Turkey and the US.”

Also, indictments in the US naming bodyguards of Turkish President Erdoğan who were engaged in violence in Washington and for the manager of the state-run Halkbank and a former Turkish economy minister accused of conspiring to violate US sanctions on Iran had deepened the rift.