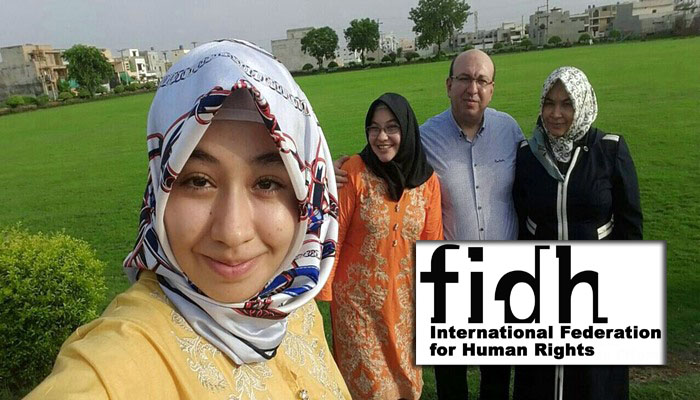 The International Federation for Human Rights (FIDH) and its member organization the Human Rights Commission of Pakistan (HRCP) said on Thursday that 285 Turkish nationals who live in Pakistan are at risk of forcible repatriation, arbitrary arrest and other human rights abuses after the recent deportation of the Kaçmaz family on Oct. 14 to Turkey over alleged links to the Gülen movement, which Turkish authorities blame for a failed coup last year.

In a statement on the FIDH website on Thursday, the rights groups called on the Pakistani government to ensure the protection of 285 Turkish nationals who are at risk of being deported to Turkey for their alleged links to the movement.

“The Pakistani government’s deportation of a Turkish family should set off alarm bells. The Pakistani government must ensure the protection of the other 285 individuals who risk being deported to Turkey and put an end to the blatant disregard of its international obligations,” Dimitris Christopolous, FIDH president said.

The statement said the 285 Turkish nationals, who formerly worked as teachers at Pak-Turk schools, and their families have been facing deportation to Turkey since November 2016 after the Pakistani government failed to extend their visas and ordered them to leave the country day before a visit to Pakistan by Turkish President Recep Tayyip Erdoğan.

“The 285 now live in fear of raids carried out by the Pakistani police and intelligence services in Pakistan. Should they be deported to Turkey, they are at high risk of arbitrary arrest, judicial harassment and detention upon arrival. Such detention may be accompanied by torture and other forms of ill-treatment. This occurs in the context of the Turkish government’s crackdown on teachers, journalists, academics, and human rights defenders in the aftermath of the July 2016 failed coup d’état in Turkey. Turkey has already succeeded in obtaining the forcible repatriation of teachers linked to the Pak-Turk schools from Malaysia, Myanmar, and Saudi Arabia,” the statement read.

On Sept. 27, the former director of the Pak-Turk schools in Pakistan, Mesut Kaçmaz, along with his wife and two daughters, were abducted from their residence in Lahore and kept in custody in an unknown place until they were blindfolded and boarded an unmarked flight from Islamabad for İstanbul on the morning of Oct. 14 despite a habeas corpus decision by the Lahore High Court.

They were then transferred to Ankara for interrogation.

While Mesut Kaçmaz and his wife Meral were put in pretrial detention after interrogation, it was learned that the teenage daughters of the Kaçmaz couple were not detained and were reportedly staying with a relative in İstanbul.

The four members of the Kaçmaz family had been living in Pakistan under the protection of the UNHCR.

When asked to comment on abduction of the Kaçmaz family members, Pakistan’s Foreign Affairs Minister Khawaja Asif said during a visit to the US in early October that the Turkish teachers and their families would only be deported once delays granted by the Pakistani courts and protection afforded by the United Nations High Commissioner for Refugees (UNHCR) had expired.

The Pakistani government’s initial deportation order for the Turkish teachers to leave Pakistan by Nov. 20, 2016 had been suspended by several Pakistani high courts.

Underlining that the UNHCR certificates of 285 Turkish teachers and their families were extended until Oct. 11, 2018, the FIDH statement said they now face broader challenges concerning their status such as the fact that 85 people have newborn children without passports; others have passports that have expired; and the members of one family have been stripped of Turkish citizenship.

“The forcible repatriation of the Kacmaz family and the risk of deportation faced by the remaining 285 Turkish nationals are in violation of Pakistan’s obligations under international law. In particular, they are in breach of Article 3 of the Convention against Torture and Other Cruel, Inhuman or Degrading Treatment or Punishment, which stipulates that “[n]o State Party shall expel, return (“refouler”) or extradite a person to another State where there are substantial grounds for believing that he would be in danger of being subjected to torture.” The abduction of Mr Kacmaz’s two daughters is also in breach of Pakistan’s obligations under Articles 22 and 37 of the Convention on the Rights of the Child, to which Pakistan is a state party,” the FIDH said.

Mesut Kaçmaz worked as the principal of the PakTurk Clifton Boys School and director of a dialogue institute, the Rumi Forum, in Pakistan. The school has so far produced hundreds of graduates and represented the country successfully at international science olympiads. Back in 2008, The New York Times covered the constructive role of the PakTurk schools and their achievements, quoting Mr. Kaçmaz.

The witch-hunt launched in 2013 in Turkey targeting alleged followers of the Gülen movement in the wake of a massive corruption and bribery scandal of Turkish government ministers and their family members on Dec. 17-25, 2013 has even affected Pakistan. Turkish President Erdoğan put pressure on the Pakistani government to close the educational and cultural institutions alleged to be affiliated with the movement and to deport Turkish citizens working at these institutions.

After the Pakistan government did not extend their visas in November 2016, the teachers and their families went to court and objected to the decision. During this period, they also applied to the UNHCR and were issued asylum seeker certificates, placing them under UN protection.

In a similar incident in Malaysia, some Turkish educators and entrepreneurs were intimidated, abducted and illegally handed over to Turkey.

Turkey survived a controversial military coup attempt on July 15, 2016 that killed 249 people. Immediately after the putsch the ruling Justice and Development Party (AKP) government along with President Erdoğan pinned the blame on the Gülen movement.

Turkey’s Justice Ministry announced on July 13 that 50,510 people have been arrested and 169,013 have been the subject of legal proceedings on coup charges since the failed coup. Turkish government has also suspended or dismissed more than 150,000  judges, teachers, police and civil servants after the coup attempt.