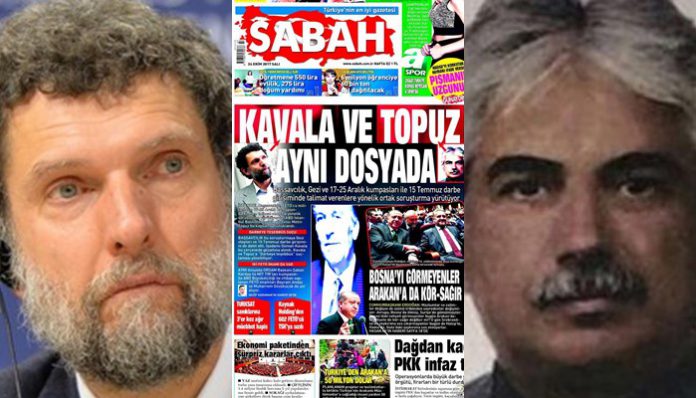 The Sabah daily reported on Tuesday that detained human rights activist and prominent businessman Osman Kavala and arrested US Consulate employee Metin Topuz are part of the same investigation over the Gezi protests of 2013, corruption operations in December 2013 and a failed coup attempt on July 15, 2016.

Kavala, chairman of the İstanbul-based Anadolu Kültür Association, was detained  by Turkish police upon his arrival at İstanbul Atatürk airport late on Oct. 18.

Metin Topuz, a staff member of the US Consulate General in İstanbul, was arrested on Oct. 4 on espionage charges and alleged links to some leading members of the faith-based Gülen movement.

According to Sabah, a member of the Turkuvaz group, run by Serhat Albayrak, brother of Berat Albayrak, Turkish energy minister and son-in-law of Turkish President Recep Tayyip Erdoğan, Kavala and Topuz are accused of attempting to destroy the constitutional order and overthrow the Turkish government.

The daily also said Center for Middle Eastern Strategic Studies (ORSAM) Director Şaban Kardaş, who was detained at his home in Ankara on Oct. 20, and two other people linked to the Gülen movement are also suspects in the same investigation.

In its front-page story on Friday Yeni Şafak launched a smear campaign against Kavala under the headline “Key Figure of Terror Fund” accompanied by a large photo of him.

Güneş claimed that Kavala was running a criminal organization that supported the Gezi Park “coup attempt,” which was actually a popular youth protest for the right to the city and further liberties, recognized the Armenian genocide of 1915, supported the Kurdistan Workers’ Party (PKK) and allied with the pro-Kurdish Peoples’ Democratic Party (HDP) in their struggle against the increasingly authoritarian President Erdoğan.

European Parliament members, the US and France all criticized the detention of Kavala.