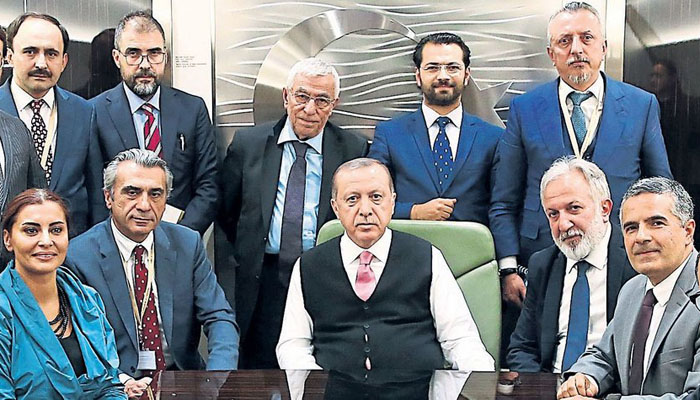 Turkish President Recep Tayyip Erdoğan on Thursday threatened the mayors of three major cities who are resisting calls to resign as part of efforts to revitalize his ruling party ahead of the 2019 elections, Turkish media reported.

Speaking during a joint press conference with his Nigerian counterpart, Muhammadu Buhari, at the presidential palace in Ankara, Erdoğan said whatever is necessary will be done if Ankara Mayor Melih Gökçek, Bursa Mayor Recep Altepe and Balıkesir Mayor Ahmet Edip Uğur fail to resign.

Regarding the three mayors’ alleged resistance to being forced to resign, Erdoğan said: “What needs to be done will be done because the relevant councils have made their decision on the matter, “ the Bianet news website reported on Thursday. “As of now, three of our mayors have submitted their resignations. Now we have three more mayors. I believe they will also submit their resignations as soon as possible.”

Erdoğan underlined his decision concerning the resignation of the mayors, saying: “The relevant people held meetings [with the mayors]. I believe they are at the moment in preparation for their resignations. I am reiterating that what needs to be done will be done because our councils have made their decision on the matter.”

Upon his return from Poland this week, Erdoğan was quoted as having said: “People do not take these offices as independent candidates but as candidates put forward by parties. We cannot regard these posts as chairs that are kept forever and never given up.”

Erdoğan reportedly asked these mayors to resign before the AKP’s provincial party congresses to be held in February 2018.

İstanbul Metropolitan Municipality Mayor Kadir Topbaş had also announced his resignation on Sept. 22 after 13 years of service. His resignation had followed disputes in the municipal administration after Topbaş rejected five previously agreed zoning amendments on the grounds that they would damage the image of the municipal council. The amendments were then approved once again without change with the votes of AKP council members.

Düzce Mayor Mehmet Keleş was also obliged by Erdoğan and the AKP to resign on Monday.

According to Voice of America (VOA) Gökçek, who has been Ankara mayor since 1994 and won five consecutive elections, has so far stayed in place, despite widespread speculation that he would step down.

Gökçek has avoided addressing the resignation issue and pointedly steered clear of the subject in public when he made an unexpected visit to the presidential palace this month.

“I presented to my president all the project details of the museum to be built opposite the [presidential] palace. I also provided information about ongoing municipal projects. … For the public’s information,” he wrote on Twitter.

Gökçek, generally regarded as a staunch Erdoğan loyalist, is well known in Turkey for tweets in which he has engaged in spats with journalists and other senior members of the AKP.

In February he suggested that US-based cleric Fethullah Gülen, blamed for last year’s failed coup, might be plotting an earthquake, with the help of foreign powers, to damage the economy.