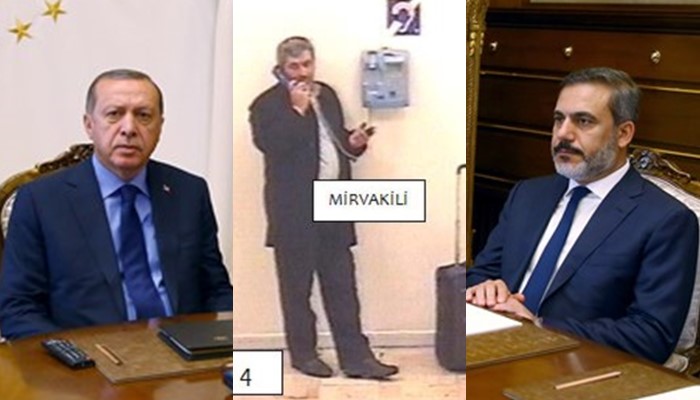 The main reason why Turkey’s President Recep Tayyip Erdoğan is terrified about a US federal case involving Iranian sanction buster Reza Zarrab, who bribed Turkish ministers and banking officials, is the fact that his secretive cooperation with Iran’s Revolutionary Guards Corps (IRGC) will be exposed, and he will be called to account.

Perhaps the botched corruption investigations of December 2013 that implicated Erdoğan and his family members is the least of the Turkish president’s worries given the bigger stakes in his much more troubling exposure in a separate but linked investigation called Tawhid Salam (Tevhid Selam in Turkish). The investigation that was launched by prosecutors in İstanbul on April 8, 2011 under case file 2011/762 uncovered the most sophisticated espionage network run by the IRGC’s Quds Force in Turkey. An almost three-year-long probe identified key Turkish and Iranian operatives, some under the cover of a diplomatic assignment attached to the Iranian Embassy and consulates, as they targeted Western interests, specifically Israel and US missions.

The probe, a copy of which I obtained, is a jaw-dropping and chilling account of how the IRGC Quds Force runs a very comprehensive network in Turkey in all sectors. It lays bare the extent and the depth of infiltration in Turkish institutions by Iranian elements. When the graft network involving Erdoğan, his family members and associates was revealed with the December 17 and 25 investigations, Erdoğan did not hastily go after the police, prosecutors and judges who investigated corruption in the government. But rather, his immediate attention was turned to a separate and confidential investigation, the Tevhid Selam case, which was not known to the public.

The Turkish president knew conspiring with the IRGC against the long-standing security concerns of Turkey and the US with regard to Iran would land him in hotter water than the graft probes would. Therefore, he was much more worried about Tevhid Selam than anything else at that moment. Only after chief investigators were removed from Tevhid Selam, prosecutors replaced and the case hushed up did Erdoğan go after other investigators and prosecutors who uncovered a multibillion-dollar graft network. Zarrab, a naturalized Turkish citizen who moved the IRGC’s funds to Iran through gold and fictitious trade under the protection by the Turkish government, is the missing link that connects the dots between the graft and Tevhid Selam cases.

The investigators who probed the IRGC’s clandestine network in Turkey that penetrated the Turkish political and intelligence apparatus came across Zarrab’s name in their own separate and independent investigation. In the Dec.17 graft probe, he was the key suspect, but in the Tevhid Selam case he was a low-key figure whose name came up when a top IRGC general revealed how Iran had tapped him to move state funds to circumvent financial sanctions.

In other words, Zarrab was only a small fish in a larger game that was set up by Iran and benefited Erdoğan personally with millions of dollars. If Zarrab decides to cut a deal with federal prosecutors, he might very well spill the beans on Erdoğan, who is afraid of that specter. Just last week he made this fear public by saying that the US wants to turn Zarrab into an informer.

I have written extensively in the past about the Tevhid Selam case but not about the Zarrab connection to the case. Since he will stand trial on Nov. 27 in federal court in New York, it is time to shed some light on how the Zarrab-Erdoğan-IRGC triangle worked. The man who is in charge of IRGC Quds Force operations in Turkey is Gen. Sayed Ali Akber Mir Vakili, at least he was until Erdoğan derailed the probe and alerted him and other Iranian agents to flee Turkey in 2014. In a phone wiretap dated Sept. 19, 2013 which was recorded under court order, Mir Vakili was heard talking about Zarrab’s role with Hakkı Selçuk Şanlı, a Turkish national who was developed as an asset by IRGC commander Nasir Takipur in the 1990s. Mir Vakili was complaining on the phone that he had incurred some losses from the gold moved by Zarrab from Turkey to Iran when he converted the gold to currency. He described Zarrab as “our Reza,” calling him by his first name, and described the gold scheme run between Turkey and Iran thorough the United Arab Emirates as a “project.”

In another wiretap dated June 18, 2013, Mir Vakili mentioned some problems in state lender Halkbank and talked about Zarrab and his connections to Zafer Cağlayan, the then-economy minister who helped Zarrab move funds by pressuring officials at Halkbank in exchange for commissions on each cash transfer. Mir Vakili explained that besides Zarrab, there was another Iranian who lived in Turkey and was involved in the oil business. He said the Iranian was also very close to Erdoğan. The IRGC general briefly talked about using other Turkish banks besides Halkbank to move funds and discussed with Şanlı how to bribe Turkish officials. There were other wiretaps in the investigation file where Zarrab’s name mentioned as the man who had been certified by Iranian authorities to run the scheme and his close connections to Bank Mellat in Iran.

Given the profile of the suspects involved in this case, it is quite likely that some of these funds were used by the IRGC Quds Force to finance terrorism operations in various countries. For example, Şanlı, who operated under the command of Mir Vakili, is no ordinary figure. He was instrumental in setting up the Quds Force operation in Turkey in the 1990s and was involved in terror attacks targeting Turkish and US interests while he was working for IRGC general Takipur. According to Turkish court documents, the Tevhid Selam terrorist group assassinated eight people in the 1990s, including journalist Uğur Mumcu, Professor Bahriye Üçok, journalist Ahmet Taner Kışlalı and several other Kemalist/secularist intellectuals in Turkey as well as foreign diplomats such as Abdul Ghani Bedawi, a Saudi diplomat working as the second secretary at the Saudi Arabian Embassy; Ehud Sadan, the Israeli Embassy’s top security officer in Ankara; and Victor Marwick, who worked for a Turkish-US logistics group.

Şanlı was arrested on May, 13, 2000 in police raids on the Tevhid-Salam network, but his boss Takipur fled to Iran. Şanlı was tried and sentenced to 12 years, six months in prison but was freed in 2004 when then-Prime Minister Erdoğan’s government passed an amnesty law in Parliament reducing sentences for some convicts. Police discovered that Şanlı, after his release, had kept a low profile before he was reactivated by the IRGC as a courier to deliver Iranian hush money to the families of the murderers of Mumcu and others killed in the 1990s on orders from the IRGC. There was strong evidence in the case file as to how this money was disbursed, to whom and under what schemes, with close supervision by Mir Vakili.

In a wiretap dated May 25, 2013, Şanlı talks about how he was relieved when Hakan Fidan, a pro-Iranian figure, was appointed to lead Turkey’s spy agency, the National Intelligence Organization (MIT). There is overwhelming evidence in the file showing that Fidan, Erdoğan’s close confidante, cooperated closely with Mir Vakili. For example, a wiretap dated June 18, 2013 reveals Fidan was passing confidential information on Cabinet meetings to the Quds Force commander, who said he learned from Fidan that then-Deputy Prime Minister Bulent Arinc had tendered his resignation after a heated exchange with Erdoğan, who defended a brutal crackdown on protestors during the Gezi Park anti-government rallies. Fidan was secretly meeting with Mir Vakili in a cafe owned by another Iranian operative in Ankara’s Cukurambar district, which is patronized by the new Islamist elite in Ankara.

The most damaging parts of the Tevhid Selam investigation are the revelations on how Erdoğan personally met with Mir Vakili on several occasion while the IRGC general was under criminal investigation on terrorism and other charges by Turkish prosecutors. The first documented meeting took place in the prime minister’s office in Dolmabahce Palace on Nov. 24, 2012. The meeting was publicly announced as an official meeting between Erdoğan and visiting Iranian Parliament Speaker Ali Larijani. Yet, Mir Vakili and Fidan also attended the meeting, and later the two had a second, separate meeting as well. The intercepted SMS messages between Mir Vakili and Şanlı on the same day showed how the Quds Force commander asked his man Şanlı to come to Erdoğan’s office and told him about his meetings with the Turkish prime minister and intelligence chief. CCTV surveillance camera footage showing the two meeting in the parking lot of Erdoğan’s office were also included in the investigation file.

The series of intercepted communications as well as physical surveillance evidence reveal Mir Vakili came to Ankara with a group of people on Oct. 23, 2013, after he was assured of high-level meetings. He was provided a protective detail from MIT with orders from Fidan, who wanted to make sure the meetings were kept secret and avoid any trouble from legal investigations that were still under way at the time. Mir Vakili was granted a private meeting with then-Foreign Minister Ahmet Davutoğlu and later had a 15-minute meeting with Erdoğan in the prime minister’s private home in Keçiören on Oct. 25, 2013. Mir Vakili and his group returned to Iran the same day on a Turkish government plane provided by MIT without clearing immigration or customs.

The police investigators working under authorization from the prosecutors had mapped out this traffic in great detail and collected overwhelming, incriminating evidence against the IRGC operatives who had infiltrated Turkey. Secret military maps of the southeastern provinces of Adana and Gaziantep and surveillance evidence around the NATO early warning radar system in Malatya’s Kürecik district were seized from the Iranian operatives. The IRGC scouted areas around the Çekmece Nuclear Research and Training Center (ÇNAEM) in İstanbul as well as the Israeli and American consulates in the same city. The maps collected during the probe have markings and explanations of entry and exit points at the targeted facilities.

Erdoğan, who calls Iran his second home, has allowed this terror network to act with impunity in NATO alliance territory despite the fact that the spy ring has violated several Turkish penal code articles, from terrorism to espionage. It was also a poke in the eye of Turkey’s key ally the US despite repeated assurances by the Erdoğan government to Turkey’s commitments to US security interests. Fidan, a Shiite who was tapped as an asset while he was a noncommissioned officer in the 1990s from the days when he participated in Islamist group study circles in Ankara, has been sleeping with the enemy although he was entrusted with protecting the nation as the head of the spy agency.

This dirty laundry is what Erdoğan is really worried about if he cannot contain the fallout from the Zarrab case in New York. This is why he wasted a lot of time and money and called in favors in his frantic efforts to try to convince the White House to secure his release when those precious resources should have been spent for Turkey’s urgent national security needs. Since he failed, Erdoğan has now turned to a hostage-taking policy by jailing US citizens as well as Turkish nationals who worked as local staff for US missions in Turkey. He is desperate.