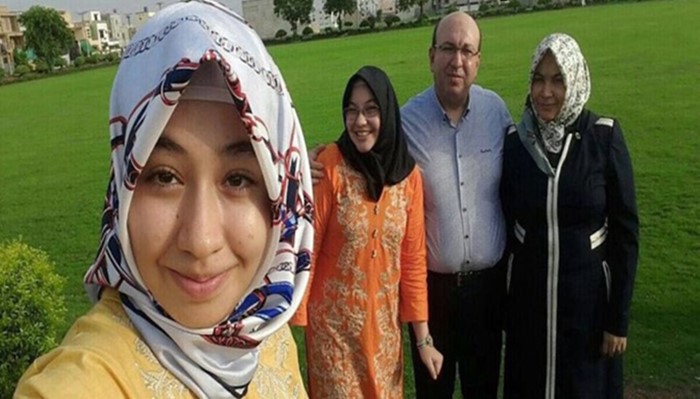 Turkish teacher Mesut Kaçmaz and his family, who were abducted from their home in Lahore at midnight on Sept. 27, were reportedly deported by the Pakistani government to Turkey on Saturday just two days before they were expected to appear before a Pakistani court, the Stockholm Center for Freedom (SCF) reported.

According to information provided by friends and colleagues of Mesut Kaçmaz, he and his family were deported to Turkey on Saturday. Kaçmaz and his wife, Meral Kaçmaz, were transported to Ankara for interrogation. They were reportedly blindfolded and boarded an unmarked flight from Islamabad for İstanbul on the morning on Oct. 14. It was learned that the teenage daughters of the Kaçmaz couple were not detained and are reportedly staying with a relative in İstanbul.

Friends of the Kaçmaz family have stated: “We are in utter shock as we have just learnt that Mr. Mesut Kaçmaz and his family were deported to Turkey on October 14, 2017. He and his wife Meral Kaçmaz were transported to Ankara for interrogation. They were blindfolded and boarded an unmarked flight from Islamabad for İstanbul in the morning. As confirmed by Meral Kaçmaz’s parents and the daughters, the teenage daughters are not detained and are reported to be staying with a relative in İstanbul.”

Saying that this action was “a blatant violation of the family members’ UNHCR protection,” the family’s friends have reminded that the Kaçmaz family’s UNCHR protection would expire on Nov. 25, 2017 and the most recent certificate extension on Oct. 13, 2018 as well as consecutive high court decisions in Pakistan that ruled out their and other Turkish teachers’ deportation to Turkey.

“What power can bypass the rule of law in Pakistan and ‘deport’ them stealthily to Turkey?” they asked and added that “it is reported that their names were not found on any flight manifest bound for İstanbul on Saturday.”

Turkish teacher Mesut Kaçmaz and his family, who were abducted from their home at midnight in Lahore, had been illegally detained in an unknown place in the city despite a habeas corpus decision by the Lahore High Court.

The four members of the Kaçmaz family, who have been under the protection of the UNHCR, were abducted on Sept. 27 at around 2:30 a.m. by 15 armed, plainclothes people, assumed to be Pakistani law enforcement or intelligence agents. The abductors blindfolded and hooded Mr. and Mrs. Kaçmaz along with their two teenage daughters.

However, the Lahore High Court had decided on Sept. 28 that no action should be taken until a decision was given by a court on Oct. 6. It should also be noted that the abduction of the family had taken place by disregarding an earlier Lahore High Court decision preventing harassment of Turkish asylum-seeking teachers and their families across Pakistan. Pakistani authorities had kept the place of detention secret, and therefore the Kaçmaz family had not been seen by anyone including their lawyers. The Pakistani government has not given any explanation, either.

Mesut Kaçmaz, who graduated from the Department of Urdu Language and Literature at Konya’s Selçuk University in Turkey, has been involved in educational and cultural activities in Pakistan since 2007. Mesut Kaçmaz, married to Meral Kaçmaz, who is a teacher as well, is the father of two daughters.

Mesut Kaçmaz worked as the principal of the PakTurk Clifton Boys School. The school has so far produced hundreds of graduates and represented the country successfully at international science olympiads. Back in 2008, The New York Times covered the constructive role of the PakTurk schools and their achievements, quoting Mr. Kaçmaz.

The witch hunt launched in 2013 in Turkey targeting alleged followers of the Hizmet movement in the wake of a massive corruption and bribery scandal of Turkish government ministers and their family members on Dec. 17-25, 2013 has even affected Pakistan. Turkish President Recep Tayyip Erdogan put the pressure on the Pakistani government to close the educational and cultural institutions alleged to be affiliated with the movement and to deport Turkish citizens working at these institutions.

In November 2016, the Pakistani government did not extend the visas of these teachers and their families and ordered them to leave the country within three days. The teachers went to court and objected to the decision. During this period, they also applied to the UNHCR and were issued asylum seeker certificates, placing them under the UN protection.

In a similar incident in Malaysia, some Turkish educators and entrepreneurs were intimidated, abducted and illegally handed over to Turkey.

Turkey survived a controversial military coup attempt on July 15, 2016 that killed 249 people. Immediately after the putsch the ruling Justice and Development Party (AKP) government along with President Erdoğan pinned the blame on the Hizmet movement.

Turkey’s Justice Ministry announced on July 13 that 50,510 people have been arrested and 169,013 have been the subject of legal proceedings on coup charges since the failed coup. Turkish government has also suspended or dismissed more than 150,000  judges, teachers, police and civil servants after the coup attempt.