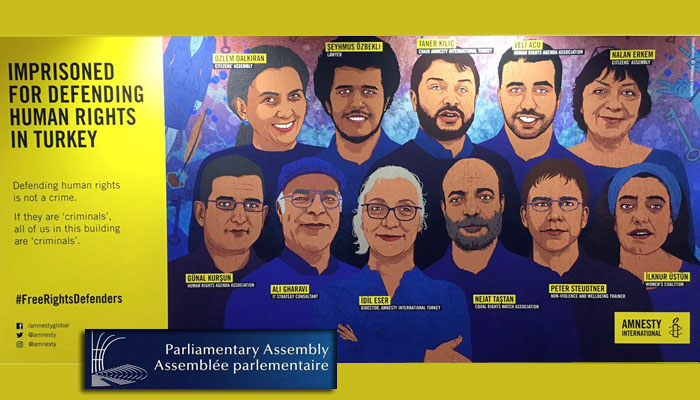 The Parliamentary Assembly of the Council of Europe (PACE) on Friday urged the Turkish government to drop all charges against human rights activists jailed in Turkey for more than 100 days and to release them immediately.

In a statement on Friday, PACE co-rapporteurs for the monitoring of Turkey Marianne Mikko (Estonia, SOC) and Nigel Evans (United Kingdom, EC) criticized an indictment naming jailed human rights activists including Amnesty International’s Turkey director İdil Eser and its Turkey Chair Taner Kılıç and demanding up to 15 years in prison on terror charges.

“We are appalled by the indictment of prominent human rights defenders, including the President and the Director of Amnesty International Turkey and members of several other NGOs, who are prosecuted on terror charges and face up to 15 years of prison. We ask the Turkish authorities to drop these charges and reiterate our call to release them,” the statement said.

Ten activists, including Eser, were detained on July 5 during a workshop at a hotel on İstanbul’s Büyükada and were put in pretrial detention by an İstanbul court on July 18 on charges of “abetting a terrorist organization.”

Kılıç was also put in pretrial detention a month earlier on charges of alleged links to the faith-based Gülen movement, which Turkish authorities blame for a failed coup last year.

On Oct. 4 a prosecutor filed an indictment calling for jail terms of up to 15 years for all 11 human rights defenders.