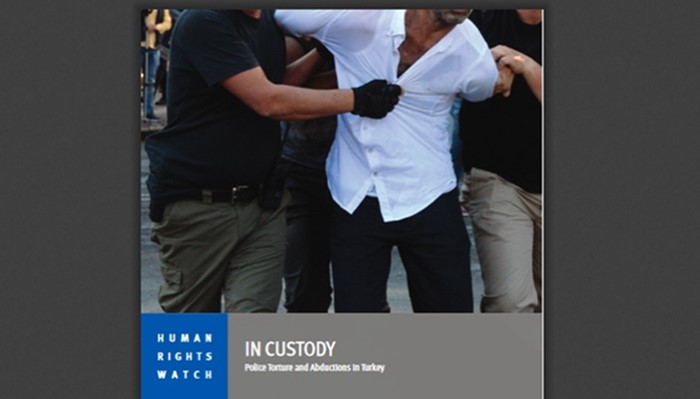 People in Turkey accused of links to terrorism or with the 2016 military coup attempt have been tortured in police custody while others have been abducted, amidst growing evidence of detention abuses, Human Rights Watch (HRW) said in a report released on Thursday.

The 43-page report, “In Custody: Police Torture and Abductions in Turkey,” details credible evidence of 11 cases of serious abuse in detention, involving scores of individuals, all but one within the past seven months. The findings are based on interviews with lawyers and relatives and a review of court transcripts, including allegations that police severely beat and threatened detainees, stripped them naked and in some cases threatened them with sexual assault or sexually assaulted them. Human Rights Watch documented five cases of abductions in Ankara and Izmir between March and June 2017 that could amount to enforced disappearances – cases in which the authorities take a person into custody but deny it or refuse to provide information about the person’s whereabouts.

“As evidence mounts that torture in police custody has returned to Turkey, the government urgently needs to investigate and call a halt to it,” said Hugh Williamson, Europe and Central Asia director at Human Rights Watch. “Given Turkey’s dark history of enforced disappearances, the authorities need to locate the men still missing and ensure that anyone held by state agents has regular access to a lawyer and their family knows where they are.”

Official figures show that in the past year well over 150,000 people have passed through police custody accused of terrorist offenses, membership in armed groups or involvement in a July 2016 coup attempt. The reported cases show that the greatest risk of torture is for people who were detained for alleged association either with what the courts have labelled the Fethullahist Terrorist Organization (FETÖ), which the government holds responsible for the attempted coup, or with the armed Kurdistan Workers’ Party (PKK/KCK).

The government of President Recep Tayyip Erdoğan publicly asserts zero tolerance for torture and has restored the safeguard of allowing detainees early access to lawyers, which had initially been removed under a state of emergency declared after the failed coup. But the government has not acted to stamp out the sharp rise in abusive practices in police custody over the past year. From court records and other sources, Human Rights Watch identified several cases in which detainees reported ill-treatment to prosecutors or during court hearings, but that they did not investigate the allegations effectively.

Several lawyers told Human Rights Watch that their clients told them of torture or showed them physical evidence. But they said many victims are afraid to complain, fearing reprisal against their family members. In one case Human Rights Watch documented, the former head of a preschool told a court at length at his trial in February that police had beaten and threatened him with sexual assault and rape to make him “confess” his involvement with “FETÖ.” Six other men on trial with him made similar assertions.

“When I visited him in prison, my husband told me what had happened to him in police custody in Kırıkkale,” his wife told Human Rights Watch. “He had lost a lot of weight and was exhausted. He cried and said he felt ashamed. ‘I am finished,’ he said. He told me he had been tortured.”

In an enforced disappearance case, Önder Asan, a former teacher, was abducted in April and was missing for 42 days before he subsequently turned up in police custody and a court sent him to pretrial detention. He told his lawyer that he was interrogated and tortured during those 42 days.

“I saw my client Önder Asan on May 13 at the police station,” his lawyer told Human Rights Watch. “He had trouble walking and held on to the wall. His hands were shaking. He was badly affected and said he needed psychological help.”

Human Rights Watch wrote to the justice minister in August about most of the abduction cases but has received no response.

Human Rights Watch found that lawyers face considerable obstacles and risks in discharging their professional duties. They are often prevented from having access to their clients without police officers being present. Lawyers may be subject to significant pressure themselves, and the professional bodies for lawyers in Turkey (the Union of Turkish Bar Associations and provincial bar associations) have failed to support them in their efforts to document torture and ill-treatment against their clients.

With three lawyers’ associations closed down under the state of emergency and several hundred lawyers in pretrial detention facing terrorism investigations and trials, it is hard for lawyers in Turkey to represent their clients knowing there is a risk of reprisals, Human Rights Watch found.

Human Rights Watch and other organizations have documented over many years Turkey’s entrenched culture of impunity for public officials accused of serious human rights violations. The situation has also led to multiple adverse rulings by the European Court of Human Rights.

Turkish authorities should urgently demonstrate their commitment to upholding the absolute prohibitions on torture and enforced disappearances, Human Rights Watch said. They should ensure prompt and effective investigations into security forces, intelligence services, and all other public officials alleged to have tortured or ill-treated detainees or unlawfully deprived them of their liberty.

The Union of Turkish Bars and provincial bar associations should publicly support lawyers’ right to defend all clients regardless of their profile, and should press Turkish authorities to uphold the rights of everyone being detained.

Turkey’s international partners, including the European Union and its member states, should put human rights concerns at the center of their engagement with Turkey. EU member states in particular should use the opportunities of next week’s Foreign Affairs Council and EU leaders’ European Council, as Turkey appears on the agenda on both meetings, to publicly echo their concerns on the human rights situation in the country. They should raise with Turkish authorities in the most urgent terms the increase in complaints of torture in police custody, and publicly call for full investigations into reported cases of torture and ill-treatment in detention and of enforced disappearances.

“At a time when Turkish prosecutors and courts ignore torture, it is vitally important for bar associations to stand up for justice and human rights,” Williamson said. “It is equally important for Turkey’s international partners to raise the issue of enforced disappearances and torture in police custody with the government at the highest levels.”

The incidents of torture Human Rights Watch documented include:

-The owner of a business who said that in June police repeatedly beat and kicked him and his two cousins in custody and took photos of them covered in blood, which were then circulated on Twitter and in the media;

-A dismissed teacher and a university lecturer transferred separately in June from prison back to police custody where they say they were hooded, beaten, and threatened during police interrogation. One of the men said he was twice given electric shocks on his leg;

-Dozens of inhabitants of a village in the southeast who in August were rounded up and beaten repeatedly in the village and then again with sticks and a rubber hose at the police station;

-A police officer whose allegation that he was tortured in police custody in April was dismissed by the prosecutor although an X-ray showed he had sustained a broken rib; and

-An accountant who repeatedly told a prosecutor and then a judge about being severely beaten in detention but was ignored.

Human Rights Watch documented cases in which people were abducted in broad daylight in Ankara and Izmir and held in secret detention sites in circumstances that suggest they could be enforced disappearances. The cases include:

-Two men whom Human Rights Watch learned were abducted, detained, and tortured by people the men believed were members of the security forces. They were only released months later; and

-A former hospital accountant, Murat Okumuş, who was abducted in Izmir in mid-June. Security camera footage showed the moment of his abduction and there are witnesses to the incident. He remains missing.