Pro-Erdoğan Turkish daily on US: Not an ally but an enemy 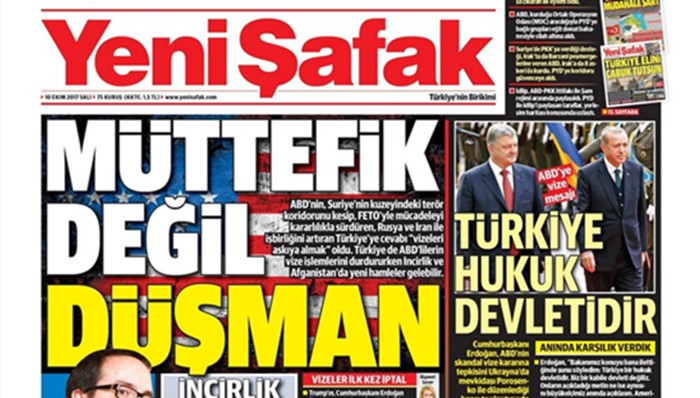 The Yeni Şafak daily, a staunch supporter of President Recep Tayyip Erdoğan, on its front page called the US an “enemy,” claiming that Turkey might retaliate by closing Incirlik Air base and withdrawing from the mission in Afghanistan.

“Not an ally but an enemy” was the newspaper’s lead headline, linking a US decision to suspend all non-immigrant visa services at its diplomatic missions in Turkey with Turkish operations in Syria and increasing cooperation with Russia and Iran.

The daily called John Bass, the departing US ambassador to Turkey, “the figurant of a dirty game.”

Taking the accusations one step further in his column, İbrahim Karagül, the editor-in-chief of Yeni Şafak, said US Ambassador Bass was responsible for all the murders in Turkey including those who were killed during a failed coup attempt on July 15, 2016.

“The US is no longer an ally and never will be. Military bases like İncirlik have become a threat to Turkish national security. It must be put on the table and evaluated as part of the fight against terrorism,” added Yeni Şafak’s editor-in-chief.

Karagül claimed that “this is the continuation of a thousand-year-old fight: We will win.”

The US on Sunday suspended all non-immigrant visa services at its diplomatic missions in Turkey following the arrest of Metin Topuz, a US Consulate General staff member on Oct. 4 in İstanbul.