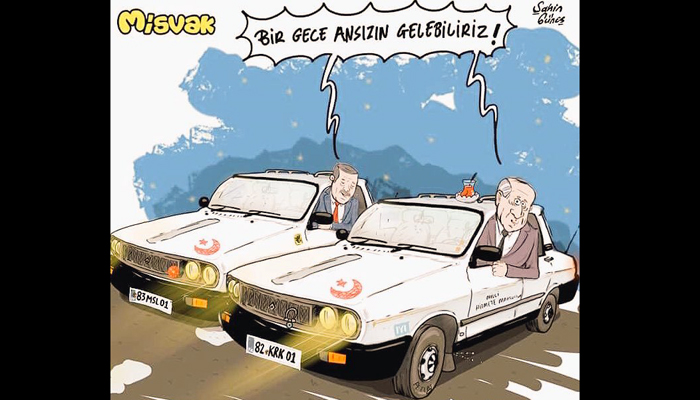 Speaking at a parliamentary group meeting of his party and responding to the Kurdish referendum for independence from Iraq, Bahçeli said on Tuesday that “they,” meaning Turkey, would have the right to annex Kirkuk and Mosul as its 82nd and 83rd provinces when the time comes.

The cartoon was deleted from the website of the magazine immediately after a public outcry erupted, Turkish media reported.

After many disappearance reports from the 1980s and 1990s, Renault’s Toros station wagons became a symbol of unsolved murders and kidnappings for many Turks, particularly citizens of Kurdish origin. Especially in the ’90s, it was allegedly used by Gendarmerie Intelligence (JİTEM) members in Turkey’s eastern and southeastern regions. There were many murder and disappearance reports from that period, and white Toros were common in a number of instances. According to witnesses reports, many Kurdish businessman, some drug dealers and Kurdish opponents were abducted in these vehicles. The corpses of some of disappeared people were later found, but most of them remain missing.