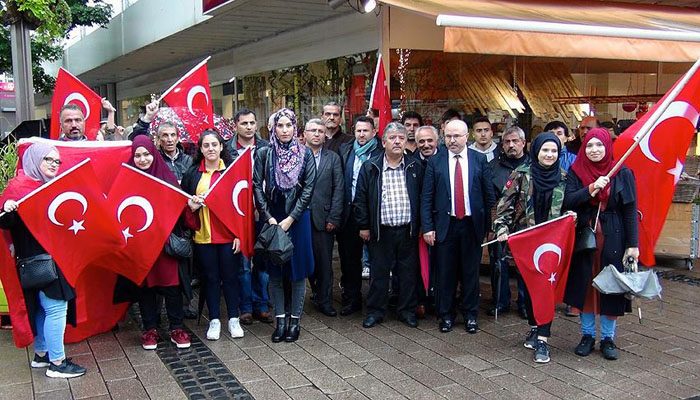 A group of Turks who said they are supporters of the Turkish government and President Recep Tayyip Erdoğan held a protest in the German city of Duisburg on Saturday demanding that Berlin halt the activities of the faith-based Gülen movement.

According to the state-run Anadolu news agency, protesters targeted followers and activities of the Gülen movement, which is accused by the Turkish government of being behind a failed coup last year.

Speaking during the protest, Bekir Sipahi, a member of an integration council in Duisburg, where over 85,000 Turks live, labeled all Gülen followers as “traitors” and added that there is no place for members of the Gülen movement in Duisburg.

Slamming German authorities for allowing the Gülen movement’s educational and inter-cultural dialogue activities, Sipahi said, “From now on, we will start acting to stop them.”

Separately, on Aug. 21, Sipahi was handed down a 30-day prison sentence for insulting Turkish-German politician and Co-chair of Alliance ’90/The Greens Cem Özdemir.

A court in Duisburg converted the sentence to a 2,010-euro fine.

Critics in Germany of Erdoğan and the ruling Justice and Development Party (AKP), including Gülen movement followers, have been targeted by pro-Erdoğan people and Turkish institutions in Germany.

In May 16 Turkish imams were accused of spying for the Turkish government on Gülen followers in Germany. Ten imams who worked for the Religious Affairs Turkish-Islamic Union (DİTİB) had fled the country to avoid legal proceedings. A total of 20 Turkish citizens faced an investigation on allegations of spying on followers of the Gülen movement, according to an April report in the German Die Welt daily.

Tensions flared between Turkey and Germany over operations against DİTİB imams who were claimed to be spying on people affiliated with the Gülen movement, which the Turkish government accuses of masterminding a failed coup attempt in Turkey on July 15, 2016, an accusation strongly denied by the movement.

In February, the coordinator of DİTİB, Murat Kayman, announced his resignation over the allegations. In the same month, German police teams raided the apartments of four DİTİB imams in North Rhine-Westphalia and Rhineland-Palatinate who were suspected of acting as informants.

The Federal Public Prosecutor’s Office (GBA) said in a statement that the imams had acted on an order issued on Sept. 20, 2016 by the directorate to profile Gülen movement sympathizers. In March, GBA launched an investigation into Halife Keskin, the foreign relations general manager of Turkey’s Religious Affairs Directorate (Diyanet), over his order to Turkey’s diplomatic missions and imams to gather information on people sympathetic to the Gülen movement.

In March the German Interior Ministry also launched an investigation into Turkey’s National Intelligence Organization (MİT) members in Germany for spying on suspected supporters of the Gülen movement in Germany.

Turkey survived a coup attempt on July 15, 2016 that killed 249 people and wounded over a thousand. Immediately after the putsch the AKP government and Erdoğan pinned the blame on the Gülen movement.

Fethullah Gülen, whose views inspired the movement, strongly denied having any role in the failed coup and called for an international investigation into it, but President Erdoğan — calling the coup attempt “a gift from God” — and the government initiated a widespread purge aimed at cleansing sympathizers of the movement from within state institutions, dehumanizing its popular figures and putting them in custody.