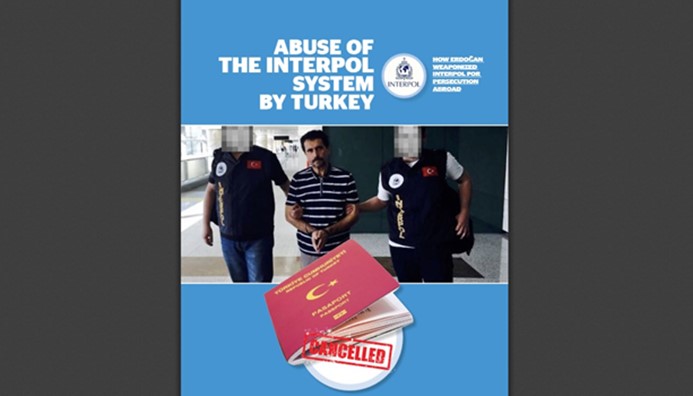 The Turkish government’s blatant abuse of the International Criminal Police Organization (Interpol) to persecute, harass and intimidate critics and opponents is much worse than one might imagine, new research by the Stockholm Center for Freedom (SCF), an advocacy group that tracks rights violations in Turkey, has revealed.

The dubious and false charges filed by Turkey through Interpol to hunt down legitimate critics of Turkey’s autocratic President Recep Tayyip Erdoğan have in some cases resulted in the extradition of people from abroad, subjecting returnees to torture and ill treatment in Turkish prisons. In other cases, people were stranded in third countries while travelling and were forced to fight forcible return as they remained in detention facilities.

Turkish government also revoked the travel documents and passports of many Turks without informing them and filed missing and lost reports with Interpol on their behalf when in fact no such request was made by passport holders. Erdoğan has also pursued a witch-hunt against foreign companies that had traded with almost 1,000 Turkish firms that were unlawfully seized by the government on fabricated terrorism charges. Interpol mechanisms were used to gather information on foreign partners on absurd charges of terrorism, sparking diplomatic crises with other countries.

“The cases we have documented so far represent only the tip of the iceberg and show a deliberate, systematic and aggressive pattern in these abuses. The real storm has not yet hit Interpol,” Abdullah Bozkurt, the president of SCF, said.

“Considering the fact that over 150,000 people have faced legal actions in the last year alone and that more than 50,000 were formally arrested on alleged links to the Gülen movement, while many had to flee the country to escape massive persecution, we’ll see a serious escalation of the abuse of Interpol notices by Turkey as the politically motivated criminal cases move forward,” he added.

The SCF report warns that Interpol, set up for cooperation among member states’ law enforcement agencies to arrest and extradite criminals and terrorists, is being undermined by the Turkish government, which is dealing a lethal blow to its integrity and the credibility of its system.

The report calls for vigilance and better screening by Interpol on notices and urges further reform of filtering mechanisms. It joins recommendations made by the Parliamentary Assembly of the Council of Europe (PACE), the Organization for Security and Co-operation in Europe (OSCE) and the European Parliament on how to improve Interpol mechanisms and halt politically motivated notices and diffusions that violate Interpol’s own constitution.