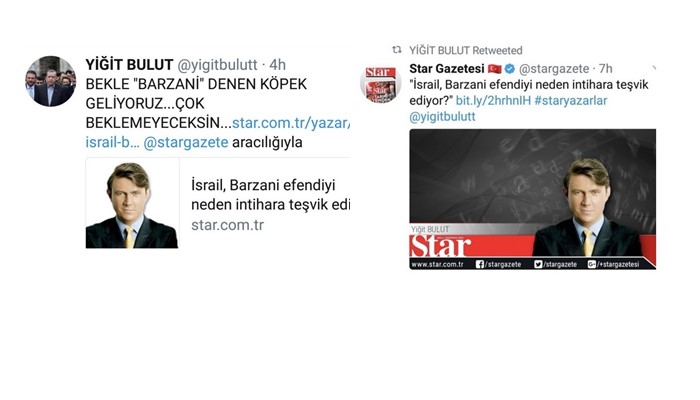 Amid tension between Turkey and Iraq’s Kurdistan Regional Government (KRG) over an independence referendum to be held on Sept. 25, Yiğit Bulut, a top adviser of Turkish President Recep Tayyip Erdoğan, on Saturday called KRG President Massoud Barzani a “dog,” threatening him with a Turkish military operation.

“Wait, dog who is called ‘Barzani,’ we are coming. You will not wait a long time…” said Bulut in a twitter message in caps attached to his article on Barzani, shared by İlhan Tanır, a Washington-based Turkish journalist. Tanır said Bulut later deleted his tweet.

In an article published in the Star daily on Sunday Bulut claimed that Israel is urging Barzani to commit suicide by holding an independence referendum.

In a video shared on the Internet in 2013, Bulut was talking to a group of ruling Justice and Development Party members and said the KRG would hold a referendum in two years to become part of Turkey.

President Erdoğan on Thursday expressed his frustration over the Kurdish leader: “Barzani has strained the relations to the point of cutoff. Whey they were unable to pay the salaries of their civil servants, we helped them. I was prime minister at the time. We gave them a $2 billion loan. But they didn’t appreciate it. Neither the US nor Russia helped them like we did.”

Turkish Prime Minister Binali Yıldırım on Sunday declared the KRG’s independence vote “illegitimate, null and void,”  while the Turkish Parliament held an extraordinary session on Saturday and approved a motion to extend for another year a mandate to conduct cross-border operations in Syria and Iraq as tensions increase in the region ahead of the referendum.

As a warning to the KRG, Turkey last week launched a military drill in the Silopi/Habur region on the Turkish-Iraqi border. According to state-run Anadolu news agency, the Turkish army on Saturday increased the level of the drill with the participation of new units.