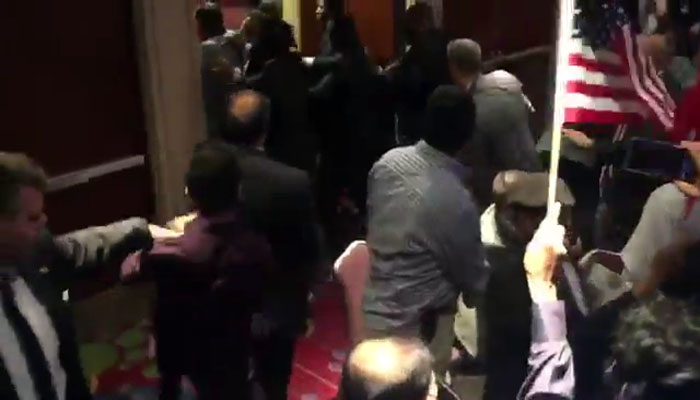 Protesters attending a speech on Thursday by Turkish President Recep Tayyip Erdoğan were beaten and ejected from the hall by security and supporters of the president, video footage of the incident shows.

Some protesters had unfurled banners during an event organized by the Turkish American National Steering Committee (TASC) at the New York Marriott Marquis hotel while President Erdoğan was addressing the crowd.

“You’re a terrorist, get out of my country,” one protester shouted before being punched and dragged away.

The demonstrators, who later posted images of the clashes on social media, said their aim was to publicly condemn the president’s policies in Turkey, Syria and Iraq, according to BBC. Some protesters also carried flags and banners in support of Kurdish militant group in Syria the People’s Protection Units (YPG).

A disturbance erupted in the hall, with the protesters removed by men in black suits. Video footage from VOA Turkish shows security and members of the audience beating the demonstrators as they were taken from the room.

It is not clear at this stage if the suited men were pro-Erdoğan attendees, presidential guards or guards hired to provide security for the event, although a Marriott Hotels spokesperson reportedly said in an email to patch.com that the “men in dark suits who were security officers in the ballroom” were “hired by the client, not the hotel.”

After the protesters were taken out, Erdoğan said, “Let’s not give this gathering to a few impertinent hall terrorists,” while trying to calm his supporters in the hall.

Erdoğan appeared at the TASC meeting to sign an agreement to launch the US branch of the Turkish Green Crescent Society.

On May 16, 2017 Erdoğan’s security detail had been caught in video footage viciously beating up protesters outside the Turkish ambassador’s residence in Washington, D.C., during an official visit to the US. Fifteen of his bodyguards have been indicted and are wanted by US authorities to stand trial.

And in 2011, security officers accompanying Erdoğan were involved in a brawl with United Nations security staff as the president tried to enter the hall to listen to Palestinian President Mahmoud Abbas speak.

NOTE: This report has been updated to reflect new information since the incident occurred on Thursday afternoon.