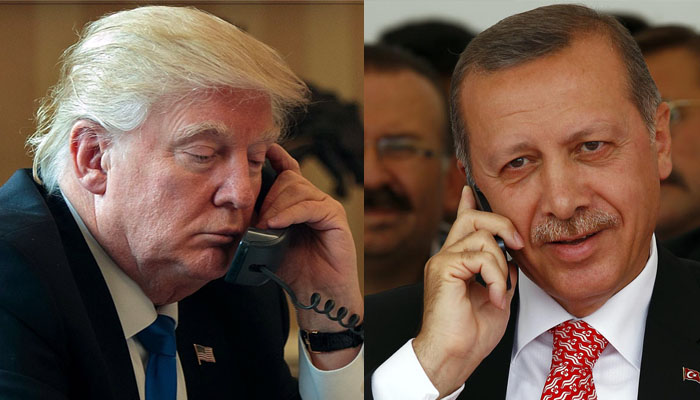 After Turkish President Recep Tayyip Erdoğan said US President Donald Trump had called him to say he was sorry about an incident involving Erdoğan’s security detail and protesters during an official visit to the US in May, the White House denied that any apology was made.

Erdoğan’s remarks came in an interview with PBS on Monday during his visit to the US to attend the 72nd United Nations General Assembly.

On May 16, members of President Erdoğan’s security detail took part in a violent brawl with a group of protesters outside the residence of the Turkish ambassador in Washington and at least 11 protesters were injured.

Upon a question concerning the incident, Erdoğan said Trump called him to say he was sorry and that he wanted to “follow up on this issue.”

According to a Guardian daily report, however, an official from the White House said Trump did not tell Erdoğan he was sorry although they discussed several other issues. A White House official told the Guardian, “They discussed a wide range of issues but there was no apology.”

Separately, since the airing of the interview, Principal Deputy Press Secretary Raj Shah told Mike Warren of the Weekly Standard that Erdoğan’s claim on Trump’s phone call apology was “not true.”

Following the incidents, the D.C. Metropolitan Police Department released a video of “persons of interest” believed to be in Erdoğan’s security detail who were involved in the attack on protesters. The police department also issued a wanted list for President Erdoğan’s bodyguards as criminal suspects for their attacks on protesters on May 16.

Indictments have been issued for 19 people, including 15 members of Erdoğan’s security detail, for attacking the protesters in Washington, D.C.

The indictments, which were announced in August, accuse the perpetrators of attacking people who were protesting the visit of Erdoğan and of committing a crime of violence. Some of them also face charges of assault with a deadly weapon. While 16 defendants were charged in June, three new defendants, all of whom are Turkish security officials, were added to the indictment.

The US House of Representatives unanimously passed a resolution in May condemning the outrageous and abusive actions of the Turkish security personnel in the violence outside the Turkish ambassador’s residence.

The House Committee on Foreign Affairs also sent a letter to Secretary of State Rex Tillerson requesting that he take steps to ensure that another violent incident involving the security detail of Turkish President Erdoğan does not take place during Erdoğan’s visit to New York for the UN General Assembly in September.

“We must ensure that Turkish National Police and accompanying security personnel respect the laws of the United States and refrain from any aggressive actions that are unrelated to the protection of the Turkish President,” said the letter. The representatives also requested that “those security personnel indicted for assaulting peaceful protestors will be denied visas to enter the United States as part of an official delegation.”