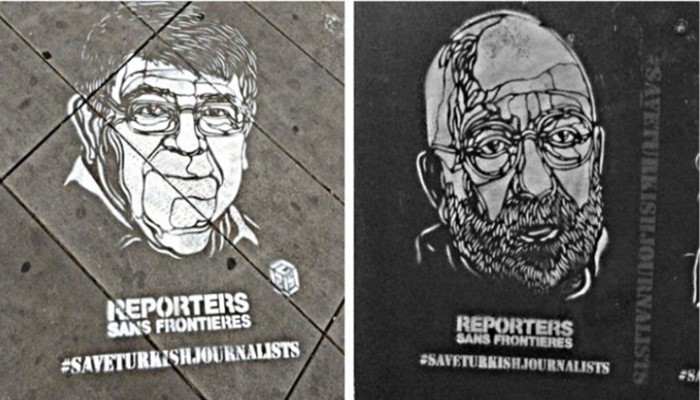 Reporters Without Borders (RSF), which is monitoring two ongoing trials of journalists in Turkey, on Tuesday called for the release of the journalists from pretrial detention.

Following the trials, RSF and ARTICLE 19 referred to the lack of evidence and called for the release of the journalists.

“Both cases represent show trials aimed at silencing dissent and alternative viewpoints, particularly criticism of the government. In both cases, ARTICLE 19 and RSF call for the journalists to be released and for the charges to be dropped in the absence of individualised evidence of involvement in an internationally recognised crime,” said a statement on the ARTICLE 19 website.

RSF on Monday attended the trial of 30 journalists, including Şahin Alpay, Ali Bulaç, Ahmet Turan Alkan and Mümtazer Türköne, who used to work for the Zaman daily, which was closed by the government due alleged links to the Gülen movement, accused of masterminding a botched coup attempt in July, 2016.

On Tuesday, RSF attended the second hearing in the case of 17 journalists and media members including Ahmet and Mehmet Altan and Nazlı Ilıcak.

The defendants, most of whom have been kept in pretrial detention for at least a year, are facing three aggravated life sentences even though there are no specific allegations indicating direct involvement in the coup.

RSF also expressed concern about the pressure on lawyers defending human rights. Veysel Ok, the lawyer for Ahmet Altan and Şahin Alpay, is also being charged this week with “insulting Turkishness” and “insulting the judiciary” due to his criticism of the Turkish judicial system in an interview. Another lawyer, Orhan Kemal Cengiz, a defendant in the Zaman daily case, represented Zaman at the Constitutional Court.