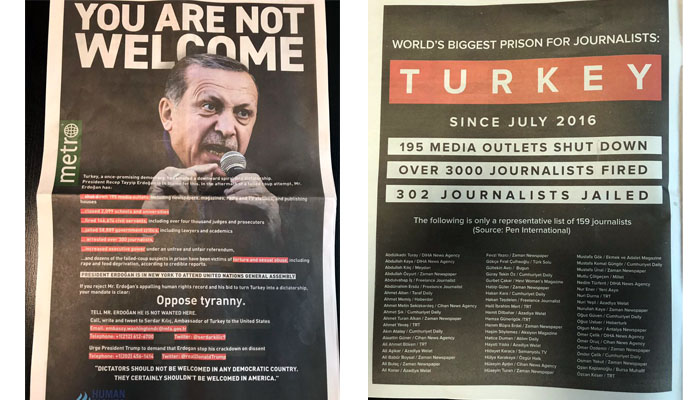 The New York-based Human Rights Foundation (HRF) on Tuesday took out an advertisement in the Metro New York newspaper criticizing Turkish President Recep Tayyip Erdoğan, who is attending the UN General Assembly (UNGA) in New York, for his crackdown on opposition in Turkey.

In a tweet from @HRF on Tuesday, the rights group said, “We took over the NY subway paper this morning to leave a message for one of the world’s foremost authoritarians. #ErdoganOut”

“Turkey, a once-promising democracy, has entered a downward spiral into dictatorship. President Recep Tayyip Erdoğan is to blame for this. In the aftermath of a failed coup attempt, Mr. Erdoğan has:

…fired 146,674 civil servants, including over four thousand judges and prosecutors

…increased executive power under an unfree and unfair referendum,

…and dozens of the failed-coup suspects in prison have been victims of torture and sexual abuse, including rape and food deprivation, according to credible reports.

If you reject President Erdoğan’s appalling human rights record and his bid to turn Turkey into a dictatorship, your mandate is clear:

TELL MR. ERDOĞAN HE IS NOT WANTED HERE.

Call, write and tweet to Serdar Kılıç, Ambassador of Turkey to the United States

‘DICTATORS SHOULD NOT BE WELCOMED IN ANY DEMOCRATIC COUNTRY.

THEY CERTAINLY SHOULDN’T BE WELCOMED IN AMERICA’,” the three-page advertisement said.

HRF also shared the names of journalists who are in Turkish jails in the three pages of the advertisement.

Turkish President Erdoğan arrived in New York on Sunday and will meet with his US counterpart, Donald Trump, on Sept. 21 on the sidelines of the United Nations General Assembly in New York.

Turkey survived a military coup attempt on July 15 of last year, after which the government launched an all-out war against dissidents, especially the faith-based Gülen movement which is accused in Turkey of being behind the coup attempt, the Kurdish minority and academics from various backgrounds.

More than 120,000 people have been detained and 55,000 have been put in pretrial detention since July 15, 2016. Those imprisoned include hundreds of academics, students, writers and journalists.