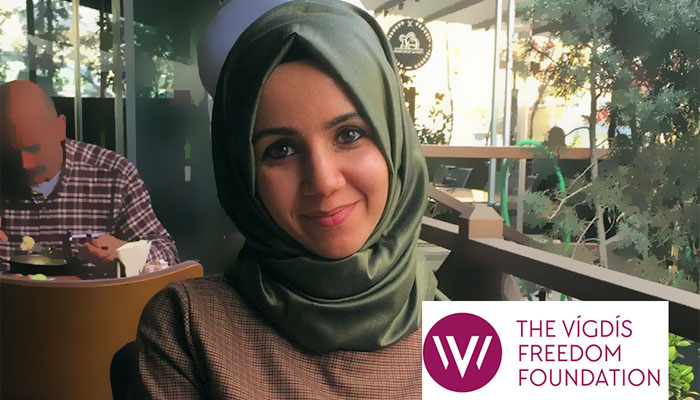 Ayşenur Parıldak, a 27-year-old reporter from Turkey’s now-closed Zaman newspaper who has been behind bars for 13 months, was named the recipient of the first Shahnoush Award by the Oslo-based Vigdis Freedom Foundation [VFF].

“The Vigdis Freedom Foundation is proud to announce that its inaugural Shahnoush Award will be given this year to Ayşenur Parıldak, a young reporter from the now-closed Zaman newspaper who is among hundreds of journalists and writers jailed after the July 2016 failed military coup attempt in Turkey,” Marina Nemat, a board member at the rights group, said during a press conference on Monday.

“I was subjected to violence and sexual abuse. I was interrogated day and night for eight days. They [police officers] were questioning me while they were under the influence of alcohol […] I am afraid of being forgotten here,” Parıldak said in a letter to the Cumhuriyet newspaper in October 2016 as quoted by Nemat.

“The Shahnoush Award will be given every year to a female prisoner of conscience whose courage has not been internationally acknowledged. By doing so, Vigdis brings attention to the suffering of women who languish behind bars for speaking out and whose human rights have been violated. They are not forgotten; they are not alone. Hope is sometimes the difference between life and death. May the [Shahnoush] Award give hope to those who need it most.”

VFF is a “woman-to-woman solidarity” group that promises “legal support and counsel to women human rights defenders who have been wrongfully accused and imprisoned and are therefore prisoners of conscience.”

Parıldak, also a law student at Ankara University’s faculty of law, was detained while taking exams on Aug. 11, 2016. She was released by the court on May 2, 2017 but was later rearrested by the same court before being freed since a prosecutor objected to the initial ruling. During her trial, she told judges that she had thought of committing suicide several times while in prison. Behind bars since last year, Parıldak faces 15 years in jail under Turkey’s broad anti-terror laws based on her tweets and alleged use of the ByLock mobile app. Turkish authorities believe ByLock indicates links to the Gülen movement, which the government accuses of masterminding the abortive coup last year. The movement denies all involvement.

According to the press release, the award was named after Shahnoush Behzadi, a 15-year-old girl who was executed in Evin Prison in Tehran in the fall of 1981, only weeks after her arrest.

The award was announced during a press conference in New York on Monday, held to kick off the Oslo Freedom Forum just a day before the UN General Assembly. (Turkey Purge)