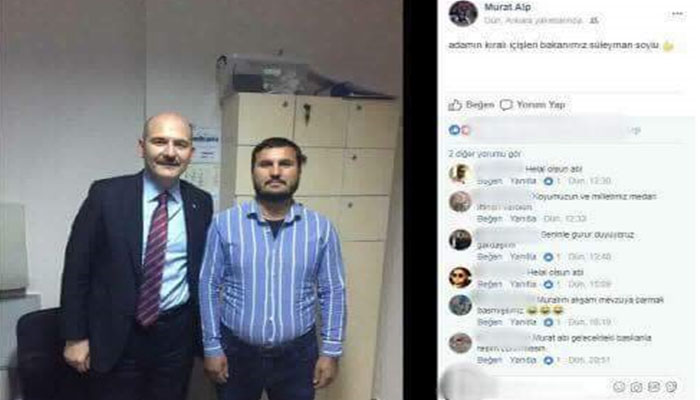 Turkish Interior Minister Süleyman Soylu has said he would not resign over a photo he posed for with Murat Alp, a participant in a racist attack on the funeral of Hatun Tuğluk, mother of jailed Peoples’ Democratic Party (HDP) deputy Aysel Tuğluk, the T24 news website reported.

“Will I resign over a photo?” said Soylu on Saturday in reaction to main opposition Republican People’s Party (CHP) Chairman Kemal Kılıçdaroğlu, who said, “There’s no place in politics, morality and life for the person who took that photo.”

“How can a minister take a photo with people who brought Turkey to this present [bad] situation? You are taking a photo with a person who attacked a grave. In a police station, at that. What does that mean? It means that they can attack graves as much as they want. ‘I am your guarantor’,” Kılıçdaroğlu said during an opening ceremony in İstanbul on Saturday.

Turkish media on Saturday reported on Murat Alp’s photos taken in the past with Bilal Erdoğan, son of President Recep Tayyip Erdoğan, and Jülide Sarıeroğlu, minister of labor and social security.

According to the reports Alp was among the people who disrupted Tuğluk’s funeral and was brought to the police station for questioning.

Soylu went to the same station with the Ankara governor and chief of police to offer his condolences to HDP deputy Tuğluk and to be briefed on the attack.

Alp had his photo taken with Soylu at the station and posted it on Facebook.

Commenting on the incident on Facebook, Soylu said he took the photo with Alp thinking that he was a neighbor who went to the police station after learning of the minister’s arrival.

Underlining that the necessary steps had been taken against the mob at Tuğluk’s funeral, Soylu said snapping a photo with an attacker will not change that fact and that exaggerated comments about it will only increase public anger.

The body of Hatun Tuğluk, who passed away on Tuesday, was taken to İncek Cemetery in Ankara’s Batıkent district on Wednesday but was removed from the grave after an attack by an ultranationalist group during the funeral in Ankara. The HDP’s Aysel Tuğluk attended the funeral with special permission from Kandıra Prison in Kocaeli province, where she is incarcerated. Some 50 ultranationalists who had gathered in the cemetery attacked the funeral, saying: “We have martyrs in this cemetery. We will not allow terrorists to be buried here.”

Following the attack, the body of Hatun Tuğluk was removed from the grave and later buried in Tunceli province.