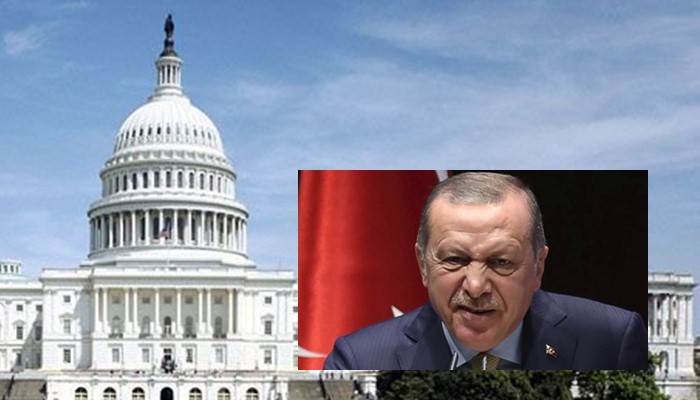 As if existing legal troubles originating from the close ties between Turkish President Recep Tayyip Erdoğan and Iranian sanctions buster Reza Zarrab, who is jailed in New York and set to be tried in federal court, as well as the deplorable actions of his bodyguards, who were charged on felony counts and indicted for assaulting US citizens in Washington, D.C., were not enough, fresh headaches may be looming on the horizon for Erdoğan and his associates if the Turkish government really moves forward with the procurement of Russian long-range S-400 missile batteries and continues cracking down on rights and freedoms.

Judging from the comments made by members of Congress during committee hearings and on the floor, anti-Erdoğan feelings in both the US Senate and the US House of Representatives are currently at their peak. Harsh words and serious criticisms were leveled against the Erdoğan government on various issues. US Senator Ben Cardin made a powerful case during a hearing on Turkey in the Senate Committee on Foreign Relations on Sept. 7, saying that if Turkey goes ahead with the purchase of a Russian missile system, this could possibly mean a violation of US sanctions legislation on Russia. Iran and North Korea. He was referring to the “Countering America’s Adversaries Through Sanctions Act,” which was overwhelmingly passed by both the Senate and the House, forcing President Donald Trump to sign the bill into law on Aug. 2, 2017.

Cardin believes the S-400 purchase from Russia by NATO ally Turkey would mean a violation of Section 231 of the law, which prohibits transactions with designated persons affiliated with the Russian defense or intelligence sectors. If that is the case, the US president will be required to take punitive action against Turkey, which could include various sanction measures such as refusing to allow Turkey to purchase military hardware and technology from the US and the denial or restriction on credits and loans for Turkey from US and global financial institutions. Foreign exchange or banking transaction restrictions could also be imposed on Turkey, which means the bankruptcy of the Turkish banking and finance sectors.

A freeze of assets, the blocking of investments and travel restrictions may very well target those who are involved in the key decision-making process of purchasing the S-400 missiles. That means President Erdoğan, who effectively makes the decisions on big-ticket defense purchases, Prime Minister Binali Yıldırım, who chairs the Defense Industry Executive Committee, Defense Minister Nurettin Canikli and other senior officials such as the head of the Undersecretariat for the Defense Industries (SSM) İsmail Demir could very well be sanctioned.

Turkey, which relies heavily on the US and other NATO allies for procurement of military and defense needs as well as technology and know-how transfer, could not cope with such measures if in fact they were to be invoked against Turkey. The costs of proceeding on the purchase of missiles from Russia clearly outweighs the benefits Turkey would reap even if it manages to convince Russia to share the missile technology for future home production. The jury is still out as to whether Turkey will actually buy the S-400 system or is just playing politics as Erdoğan did with the Chinese, only to drop the negotiations altogether at the 11th hour.

In any case, Erdoğan’s efforts to orbit Turkey out of NATO towards the Iran and Russian axis have not gone unnoticed. Apart from the S-400 matter, Turkey opted out of US and EU economic sanctions and continued to trade with Russia, creating a rift with its NATO allies. Ankara’s soft pedaling on Russia with regard to the Ukraine crisis and Erdoğan’s cozying up to Russian President Vladimir Putin have irritated Turkey’s allies to the extent that they have started debating whether they should switch to transactional relations with Turkey rather the alliance based mutual security and defense assurances.

Despite efforts by the US State Department to continue appeasing Erdoğan’s Turkey in the name of engagement, which has done nothing other than to exacerbate the already bad situation in Turkey in the last couple of years, the US Congress appears to be toughening against the 21st century European dictator and is limiting the ability of the US administration to play favorites with the Erdoğan government. It turned out that the Pentagon’s stark assessment of the Erdoğan regime’s ambitions for Turkey and the region was right on the money rather than the one erroneously pushed forward by State department officials.

As the list of grievances against the Erdoğan government has continued to pile up, ranging from rights violations and mass arrests including of US citizens to a systematic and deliberate campaign of fuelling anti-American sentiment in Turkey, we’re likely to see more actions from the US Congress as Capitol Hill faces more pressure from rights organizations, advocacy groups and others who will not stop lobbying members of Congress. Unless of course the US administration miraculously gets its act together and finally recognizes that the Erdoğan regime is a threat not only to the stability of Turkey but also to the region, allies and partners.

Therefore, it was no surprise to see that the appropriations bill introduced on Sept. 7, 2017 by Senator Lindsey Graham for the Department of State, foreign operations and related programs for fiscal year 2018 is set to bring additional sanctions against Turkey if it passes. The bill authorizes the secretary of state to deny entry into the US to any senior Turkish government official who is responsible “for the wrongful or unlawful prolonged detention of citizens or nationals of the United States.” As of today, about a dozen US nationals including a NASA scientist, a long-time employee of a US consulate and an American pastor have been jailed in Turkey on fabricated charges of terror, espionage and coup plotting. Many believe the Erdoğan government has taken them hostage to drive a bargain with the US with a view to freeing Reza Zarrab first and foremost and hushing up the case in federal court in New York so that it won’t implicate Erdoğan and his family members.

Graham’s bill also prohibits the US administration from using funds available under the act to facilitate or support the sale of defense articles or services to the Turkish Presidential Protection Directorate. The ban would be lifted only if Turkey takes three steps: A) govern democratically and protect the rights of minorities and women; B) implement reforms that protect the freedoms of expression, association and assembly, including the ability of civil society organizations, political opposition parties and the media to function without interference; and C) release political prisoners and afford detainees due process.

It appears the anti-Erdoğan sentiment in the US Congress will grow further and stronger given the fact that the Turkish president does not seem to care about playing the role of a rational actor in global politics. Instead, like a rogue dictator, he thinks he can bully his way through troubles and get away with a venomous bashing of key allies all the time just like he does to his opponents and critics on the home front. I suppose Erdoğan will come to learn the hard way that his actions have consequences. There is simply no impunity when he plays the role of a mafia leader with his thugs beating the hell out of innocent protestors in the US capital, or adopts hostage-taking mafia tactics with foreign nationals locked up on false charges. He already crossed the red line when he deliberately exposed the location of US troop deployment in the dangerous Syrian theatre, where US-led coalition forces are battling militants of the Islamic State in Iraq and the Levant (ISIL).

The main assumption in dealing with Turkey now should be based on the bitter fact that Erdoğan is not a dependable leader and will continue playing his spoiler card whenever he sees the opportunity to threaten and blackmail Turkey’s allies and partners. He will not hesitate to resort to a scorched-earth policy when he thinks his rule is about to be crumbled just like he did right after the major corruption investigations in December 2013 or in the aftermath of the June 7 elections when his party lost the majority. In the former case, he turned the entire democratic institutions upside down with mass purges of the judiciary and law enforcement agencies. In the latter, his notorious intelligence agency orchestrated false flag terror actions to scare citizens into casting their votes for his party to regain its lost majority.