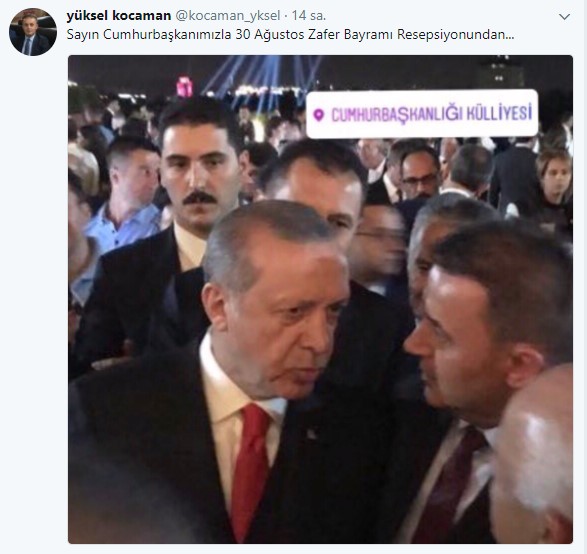 Kocaman, who shared a photo of himself with Erdoğan during the official reception at the presidential palace, marking the 95th anniversary of the Aug. 30, 1922 victory of Mustafa Kemal Atatürk over the Greek military, had previously posted tweets about investigations into the Gülen movement, accused of mounting a coup attempt last summer, and shared pro-government media reports, demonstrating his support for the torture of military officers even though investigations are not complete.

President of Turkey’s Constitutional Court (AYM) Zühtü Arslan, who was pictured bowing to Erdoğan at the Victory Day reception, has been criticized on social media for damaging the neutral and independent judiciary.

Main opposition Republican People’s Party (CHP) deputy Muharrem İnce questioned the neutrality and independence of the judiciary in Turkey, sharing the photo of Arslan bowing to Erdoğan in a tweet.

“Judicial independence with an AYM president who is bowing to the person he might have to try according to the constitution. Who would trust that judiciary?”

Another CHP deputy, Mahmut Tanal, also commented on the photo and said a judge who gives briefings to the executive branch and stands up for the executive (out of respect) cannot dispense justice.

The independence and impartiality of the Turkish judiciary have been questioned since Turkey’s crackdown on the judiciary in the aftermath of the botched coup attempt last summer.

The Turkish government has arrested a total of 2,431 judges and prosecutors and dismissed 4,424 others since the coup, a recent Constitutional Court general assembly ruling revealed.

A total of 4,664 judges and prosecutors have been investigated, and 2,431 of those were put in pre-trial detention by Turkish courts over alleged involvement in the coup attempt and membership in a “terrorist organization.”

On June 8, Nils Muižnieks, the Council of Europe’s commissioner for human rights, expressed concern about the new composition of HSYK based on amendments which were approved in April 16 referendum, saying it does not offer adequate safeguards for the independence of the judiciary.