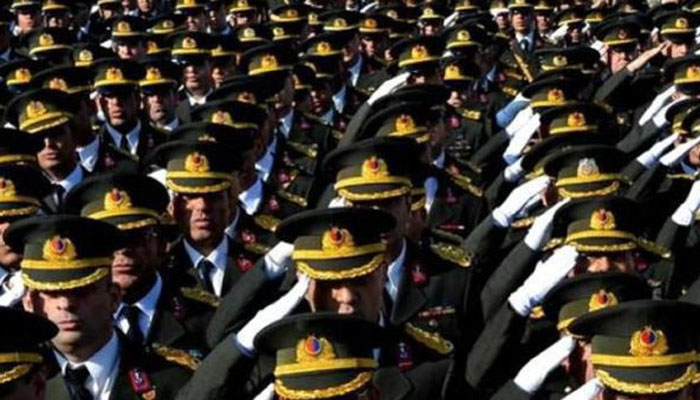 The Turkish Armed Forces (TSK) has developed software to identify members of the Gülen movement, which is accused by the Turkish government of mounting an abortive coup last summer, the Hürriyet daily reported on Wednesday.

According to the report, the software categorizes the relations of TSK members with the Gülen movement using green, yellow and red colors.

In the software, overseas missions, disciplinary reports, quick promotions, assignments to recruit students and evaluate student grades and academic duties are considered negative points that imply links to the Gülen movement. After the evaluation of a TSK member by the software, he or she is categorized as green, yellow or red, and further investigations are launched for those marked yellow and red.

While investigations into low-ranking military officers are still going on, the software has reportedly been developed to more quickly identify TSK members linked to Gülen.

During last Turkey’s Supreme Military Council (YAŞ) meeting, it was claimed that all Gülen supporters in high-ranking positions were dismissed by means of this software.

Turkish Defense Minister Fikri Işık said in March that the ruling Justice and Development Party (AKP) government dismissed a total of 22,920 military personnel after the coup attempt on July 15, 2016.

In response to a question by Republican People’s Party (CHP) deputy Muharrem İnce, Işık said 6,511 officers and 16,409 cadets were dismissed from the military. The cadets included 4,090 from military high schools, 6,140 from noncommissioned officers colleges and 6,179 from university-level military schools.

The government is at the center of criticism over dismissing 22,920 military personnel due to their ties to the Gülen movement, despite the fact that the Turkish military stated on July 27 that only 8,651 military members including cadets and conscripts took part in the July 15 coup attempt.

“If it was a coup perpetrated by the Gülen movement and 22,920 military personnel were dismissed for their connections to the movement as Turkish President Tayyip Erdoğan and the government assert, why did only 8,651 military members participate in the coup?” is a question being asked by critics.

Defense Minister Işık said last month that 30,000 new people would be enlisted in the military.

A report prepared by the EU Intelligence Analysis Centre (IntCen) revealed that although President Erdoğan and the Turkish government immediately put the blame for the July 15 failed coup on the faith-based Gülen movement, the coup attempt was staged by a range of Erdoğan’s opponents due to fears of an impending purge, according to a report by The Times newspaper on Jan. 17.