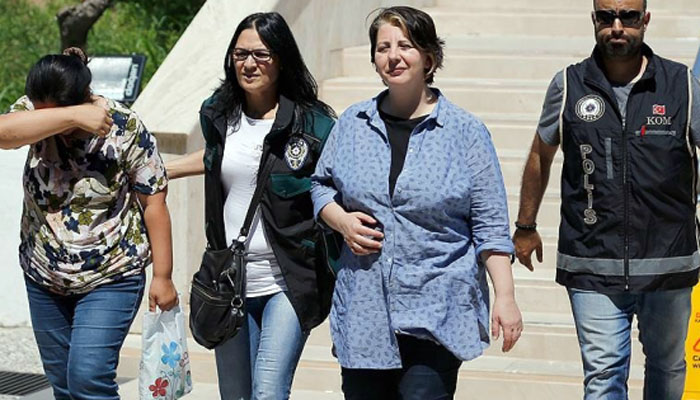 B. Atayün, the wife of former police chief Anadolu Atayün, who has  been under arrest for some three years, was arrested by a court on Monday after she was caught while trying to escape to Greece in a boat.

According to the state-run Anadolu news agency, following a 34-hour chase launched upon a complaint, police in Muğla’s coastal district of Fethiye conducted an operation at the city’s fishing port where five people who were aboard a boat for an illegal departure to the Greek island of Rhodes were caught.

The five included Atayün’s wife and his son B.S., as well as a doctor who was earlier dismissed as part of a government crackdown against the Gülen movement, his wife and a captain who was previously investigated for human smuggling.

A Muğla court arrested Atayün’s wife, the doctor and the captain while releasing the remaining two on judicial supervision on Monday.

Anadolu said Atayün’s wife earlier used ByLock, a mobile app that Turkish authorities see as a communication tool for followers of the Gülen movement, which is accused of being behind a failed coup last year. The movement denies any involvement.

The escape attempt came only days after Atayün’s two other children, 17-year-old Y.A. and 15-year-old H.A., were briefly detained over their alleged use of the ByLock mobile app.

Former head of the Konya police’s anti-smuggling and organized crime bureau, Anadolu Atayün was put in pretrial arrest over links to the movement in May 2015.