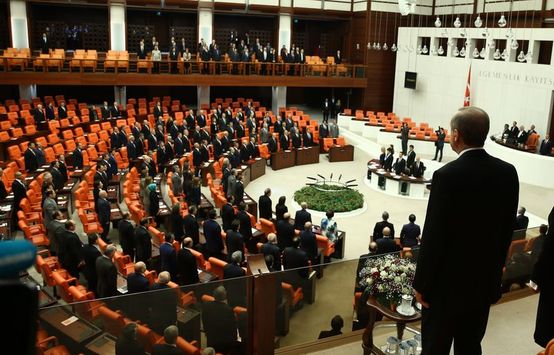 With the new government decrees enabled by state of emergency powers, the authority of investigating and prosecuting deputies was given to the Ankara Chief Public Prosecutor’s Office, which will handle all the legal procedures concerning the 550 deputies in Parliament in the event they are accused of an offense prior to or after elections. Deputies will be prosecuted in the Ankara high criminal courts.

CHP Deputy Chair Zeynep Altıok criticized the new government decrees for dispossessing deputies of their authority to legislate and said: “With these two KHKs [state decrees] issued today, significant legal and administrative changes were introduced in Turkey. The democratic parliamentary system was removed before elections take place and the TBMM [Turkish Grand National Assembly] was de facto abolished. It is a legal and democratic scandal that deputies can be investigated because of their ‘pre and post-election activities’.”

“The political centers of power in democracies are the parliaments. [Here, the aim is to] weaken Parliament, restrict and intimidate deputies and to monitor deputies via one investigatory institution. Prosecutors who will be appointed to investigate deputies will be chosen by the HSK [Board of Judges and Prosecutors] according to that. This is to impose tight control over Parliament using the judiciary as a stick, as monitored by the palace [presidential palace of Erdoğan].” said parliamentary Constitution Commission member CHP deputy Muharrem Erkek.

HDP Şanlıurfa deputy and spokesperson Osman Baydemir also criticized the decrees and said Parliament will be totally deactivated with these decrees.

“Parliament was made nonfunctional after the April 16 referendum. This last KHK aims to totally deactivate Parliament. For instance, Article 83 of the constitution concerning the immunity of parliamentarians is removed. A prosecutor is allowed to investigate and prosecute a deputy whenever he wants to. It is an illegal decree that will not require that parliamentary procedures be implemented. Can a KHK remove a constitutional article?” asked Baydemir.

Baydemir argued that the fact that deputies can be investigated while permission is required from local authorities to launch an investigation into state employees is a “declaration of war against the will of the nation.”

CHP İstanbul deputy Sezgin Tanrıkulu commented on the decrees in a social media message and said: “The Ankara chief public prosecutor was appointed as a kayyum [government-appointed trustee] for all deputies with KHK number 694, which was unexpectedly issued one night.”

According to Altıok, the Turkish state is being restructured around Turkish President Erdoğan with regulations that are not linked to emergency rule.

Four thousand new judges and prosecutors will be employed and a party judiciary, a party police force and a party state are being established, said Baydemir, implying that all institutions of the state are controlled by the ruling Justice and Development Party (AKP).

The Turkish government has suspended or dismissed more than 146,000 people, including soldiers, judges, teachers, police officers and civil servants, since a coup attempt last summer through government decrees issued as part of a state of emergency.