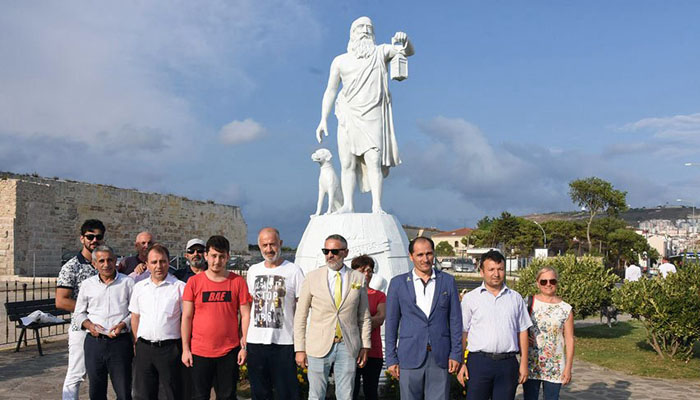 A group of people from the Erbakan Foundation, a conservative institution established in the memory of the late Turkish Prime Minister Necmettin Erbakan, have demanded the removal of a statue of the Greek philosopher Diogenes from the entrance of Sinop province in Turkey’s Black Sea region.

At a press conference in front of the statue on Wednesday, İsmail Teziç, the Sinop representative of the foundation, said they are not against the art of sculpture; however, they demand that the Diogenes statue be removed from the entrance to the city as it attaches a Greek ideology to Sinop.

“We want the Diogenes statue to be taken from the entrance of Sinop and moved to Balatlar [a local Byzantine church]. We will exert efforts for this. We will fight it to the end, whether a petition or a permanent press statement here is required,” he said.

Diogenes was born in Sinope, modern-day Sinop, in 412 or 404 BC. After being captured by pirates and sold into slavery, he eventually settled in Corinth and died there in 323 BC.

Diogenes is known as one of the founders of Cynic philosophy. He was also noted for having publicly mocked Alexander the Great.