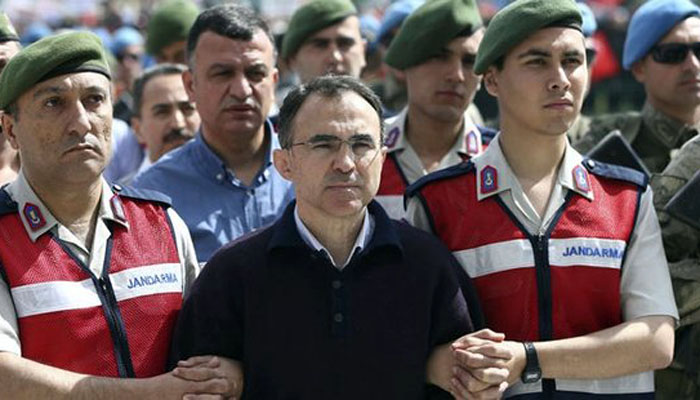 Brig. Gen. Hakan Evrim, a suspect in the July 15, 2016 coup attempt trial and commander of Akıncı Airbase, where Chief of General Staff Gen. Hulusi Akar was taken hostage, said on Tuesday that he was surrounded by armed men and soldiers on the night of the coup and was threatened to support the putsch.

Speaking during his defense at the Ankara 17th High Criminal Court in Sincan where 221 suspects accused of being ringleaders of the failed coup attempt on July 15 are standing trial, Evrim denied his involvement in the coup attempt and said he was threatened to provide logistical support from Akıncı Airbase.

“I saw armed people, some civilians and some soldiers, in front of the 141th air squadron on the evening [of July 15, 2016]. I asked: ‘Who are you? What are you doing here?’ and they suddenly surrounded me and pointed their guns at me. They told me: ‘This has nothing to do with you. We don’t want to harm you, your family or your staff. If you want their well being, just do what we want. Otherwise, it will not be good for you or for your staff’,” he said according to a report on the Diken website.

Underlining that he was taken by force to the 143rd air squadron where he was told that Chief of General Staff Akar had come to his office to greet him as commander of the airbase, Evrim said Akar was there along with former Air Forces Commander Gen. Akın Öztürk, who is also a suspect in the coup attempt trial.

“There were five or six people along with Öztürk and Akar. I sat in my chair as it was the only empty chair in my office and kept silent. They were talking about the developments that night and I had no idea of the details. As they were talking, I took the opportunity to leave the room when somebody spoke about need to call someone. While leaving the room, I addressed Akar and showed him where our aide-de-camp sat and told him that they could help him if he wanted to talk to anyone on the phone,” he said.

Denying claims by Akar that Evrim offered to put him in touch with US-based Turkish Islamic scholar Fethullah Gülen, who is accused by Turkish authorities of masterminding the failed coup, by phone on the night of the coup, Evrim had said during a hearing in May:

“[Generals] Hulusi Akar, Akın Öztürk, Kubilay Selçuk and Mehmet Dişli were in the room. Akar said he agreed with the accusations and that the country should be get out of its difficulties. He said meeting with [former President] Abdullah Gül, [former Prime Minister] Ahmet Davutoğlu and other party members would be useful. I said if you want, I can help you have phone conversations with the leaders of civil society and opposition party members as well. I was not there to persuade Akar. I was taken there by force.”

Repeating his earlier views on the coup attempt, Evrim said: “This was not a coup attempt that originated with the TSK. It was carried out by people who knew nothing about planning. July 15 was planned to fail.”