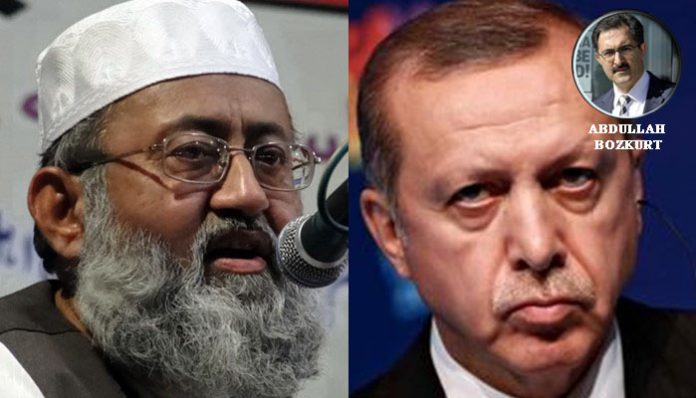 President Recep Tayyip Erdoğan and his brethren have been trying to woo controversial Indian Muslim clerics for some time now in their campaign to enlist fresh allies for expanding the global reach of Turkish political Islam that is fueled by the militant ideology of radical clerics clustered around the current government in Turkey.

The revival of the caliphate, a passionate subject among Indian Muslims, is being projected by Turkish government operatives to gain a foothold in the Indian Muslim community of some 180 million. Securing the allegiance of Indian Muslims would be an important as well as symbolic move for Erdoğan’s ambitions to portray himself as the de-facto leader of all Muslims worldwide. That is why Erdoğan’s henchmen have been busy exploiting the near perfect match between Turkish and Indian Islamists who love to entertain conspiracy theories to scapegoat others for their own failures, deflect criticism and avoid accountability and responsibility. The ultimate goal is to secure backers among Indian Muslims who can be mobilized for whatever political goal is set by Turkey’s top Islamist president.

Two prominent Indian figures appear to have emerged as the main conduits for Erdoğan’s people in their attempts to carve out spheres of influence in the Indian Muslim community. First, Sheik Salman Al-Husaini Al-Nadwi, a prominent figure who issued statements supporting Abu Bakr al-Baghdadi and the Islamic State in Iraq and the Levant (ISIL), only to retract them after a backlash, appears to be a gateway for Erdoğan’s Islamists clergy to penetrate India. Nadwi, a staunch backer of Erdoğan, has offered comments praising him while disregarding major corruption investigations in billions of dollars that incriminated Erdoğan and his family members. Nadwi has also taken a stand against critics of the Turkish president without questioning the credibility of allegations and provided a carte blanche for Turkey’s oppressive ruler, who has locked up more than 50,000 people including 275 journalists in the last year alone on trumped-up charges.

Well, Nadwi is no foreigner when it comes to befriending oppressive Islamist rulers. In July 2014 he wrote a letter to the rulers of Saudi Arabia offering to raise a militia of 500,000 Sunni Muslim Indian youths to become part of a global Islamic army. He said they can be a fighting a force from Iraq to Syria or wherever needed to help Muslims. For a man like Erdoğan who has been investing in armed proxy groups in Syria, Iraq and Libya, this must be music to his ears. He may very well take Nadwi up on this offer.

Erdoğan appears to be dangling the idea of reestablishing the caliphate, once located in Turkey under Ottoman rule, to attract Indian Muslim figures such as Nadwi who, like many in the Indian Muslim community, long to revitalize the defunct institution. In fact, in his letter to the Saudi government, Nadwi lambasted Mustafa Kemal Atatürk, the founder of modern Turkey, saying he had “ripped apart the caliphate and ushered in an age of atheism” in collusion with the British.

Seizing the opportunity to make inroads into Indian Muslim groups, senior figures of Erdoğan’s ruling Justice and Development Party (AKP) government have been busy promoting the caliphate debate in public discourse. A think tank called the South Asia Strategic Research Center (Güney Asya Stratejik Araştırmalar Merkezi or GASAM in Turkish) that was established by Ali Şahin, a Pakistani-educated Islamist who now serves in Erdoğan’s government as deputy minister for European Union affairs, functions as one of those gateways for channeling Erdoğan’s ideas on the matter.

According to an account provided by Indian and Pakistani academics who visited Şahin during a Turkish government-sponsored trip to Turkey in September 2016, the Turkish deputy minister said that “Muslim countries, Turkey and Middle Eastern countries must remove their borders as there were less disputes in the Ottoman era when the whole area was controlled by a single caliph.” He was pushing the caliphate idea to his guests in the government office. Şahin, who led GASAM until 2015 as chairman of the board of directors before assuming a government position, has been one of the henchmen for Erdoğan’s overtures to woo Indian Muslims. He tapped government resources to promote Islamist projects in South Asia and used Turkish diplomatic clout to export the AKP’s Islamist ideology. The Presidency for Turks Abroad and Related Communities (YTB), a government agency that works as the long arm of Erdoğan, developed joint projects with GASAM catering specifically to India and Pakistan under the scheme of cultural and academic programs.

On May 14, 2016 GASAM organized a conference on the caliphate movement in India in Istanbul, featuring AKP deputy Zehra Taşkesenlioğlu and the prime minister’s chief advisor, Ömer Korkmaz. Interestingly enough, Nadwi’s son Yunus, who has been studying at Turkey’s Fatih Sultan Mehmet Vakfı University – an institution of higher education that was set up upon a proposal from Erdoğan with generous support from the government — was also among the panelists. Yunus now acts as a liaison between Turkish Islamists in Erdoğan’s inner circle and his father. During a visit to India on Nov. 12-25, 2016, Yunus was the guide for two Turkish academics, Hamdi Arslan and Serdar Demirel, and introduced them to the larger Indian Muslim community groups. Both Arslan and Demirel, Erdoğan loyalist Islamist operatives, have been championing the deeper engagement with Indian Muslim leaders.

Arslan, a 61-year-old Saudi-educated cleric, is a lecturer at the same university where Yunus is studying, and he has visited India many times, establishing links to various Muslim figures.

Arslan also serves as a member of the High Advisory Board for the Foundation for Human Rights and Freedoms and Humanitarian Relief (İnsan Hak ve Hürriyetleri ve İnsani Yardım Vakfı, or IHH in Turkish), a pro-government charity organization that was accused of arms smuggling to jihadist groups in Syria according to United Nations Security Council documents. He has been advocating a view of reviving caliphate links to the Indian Muslim community. Arslan is also a member of the board of directors at the International Union of Muslim Scholars (IUMS), a Muslim Brotherhood-linked organization that was led by pro-Erdoğan imam Yusuf al-Qaradawi, a cleric who endorsed suicide bombings and armed rebellion in Syria.

Serdar Demirel, who has a special interest in the Indian Muslim community, is a Pakistani-educated professor of Islamic studies who works at İbn Haldun University, an institution that was set up by Erdoğan’s corrupt family foundation called the Service for Youth and Education Foundation of Turkey (TÜRGEV). Demirel has been writing for the radical religious Yeni Akit daily since 2005 and is known to be a staunchly anti-Western and anti-European Union figure. While he was in New Delhi in November 2016, he made a trip of almost 1,500 kilometers to Kalkota to personally join the Muslim protest rally against Prime Minister Narendra Modi’s government over a uniform civil code proposal that was seen as violating Islamic divorce rules. He lamented that such a big protest gathering was not covered adequately in the Turkish media.

The second Indian Muslim cleric who established links with the Erdoğan government is Zakir Naik, a radical preacher who is facing an arrest warrant in India over unlawful activities and promoting religious hatred. His preaching, banned in India, Bangladesh, Canada and the United Kingdom, is believed to have inspired one of the terrorists who staged the deadly Dhaka attack on July 1, 2016 that killed 29 people including 18 foreigners. Naik met with IHH people in Istanbul as well as an extremist figure, Nureddin Yıldız, a family cleric of Erdoğan, during a visit to Turkey in May 2017 and delivered a speech at the Turkey Youth Foundation (TÜGVA), an Islamist group that is managed by Erdoğan’s son Bilal Erdoğan.

Yıldız is a highly controversial cleric in Turkey; yet, he has been giving lectures for TÜGVA as well as for the youth branches of Turkey’s ruling Justice and Development Party (AKP). He is linked to armed jihadist groups in Syria and he has been calling for a global jihad. In his scandalous remarks, he approved the marriage of underage girls as young as six, advocated a view that members of the Gülen movement, a civic group that is highly critical of Erdoğan on corruption and the Turkish government’s aiding and abetting armed jihadist groups, must be executed, hanged and their arms and legs cut off. In fact, just like the Dhaka attacker who was inspired by Naik’s speeches, an al-Qaeda-linked Turkish police officer who assassinated the Russian ambassador to Turkey, Andrei Karlov, on Dec. 19, 2016, was inspired by Yıldız. This dangerous cleric’s venomous preaching circle in Ankara’s Bayrampaşa district, a neighborhood from where Turkish jihadist groups drew recruits, continue to incite militants as of today. By the way, Yıldız has also developed ties with Nadwi. He was sitting next to Nadwi when the Indian cleric came to Turkey to deliver a speech at a conference in Turkey’s Antalya province in January 2016.

There are other Indian Muslim figures and groups that the Erdoğan government hopes to tap in order to shore up his support back home. This is part of a campaign to amplify a message to his core Islamist constituency that the global Muslim community is looking up to Erdoğan’s leadership. The Turkish Embassy in New Delhi as well as the consulates in Hyderabad and Mumbai have been laying the groundwork for this, scrambling diplomats and consular officials to make the rounds among Indian Muslims. The government is also funding and supporting parallel tracks that were pursued by front NGOs and institutions for that purpose. But no doubt it, when the time comes, Erdoğan will mobilize them for his political goals just like he has already started doing in Europe among Turkish and Muslim diaspora groups, which drew harsh criticism from the European Parliament (EP) on July 6, 2017, warning the Turkish government in a strongly worded resolution to refrain from such systematic efforts to mobilize the diaspora in EU member states.

The divisive political Islamist discourse of Erdoğan has destroyed democracy in Turkey with the rule of law suspended, fundamental rights trampled and Parliament rendered a rubberstamping body. It has turned Turkey, a country that used to follow a foreign policy of non-interference into other countries’ affairs, into an irrational state actor that is bent on exporting this extremist ideology abroad as part of regime change plots. It remains to be seen to what extent, if any, the Indian government would be willing to accommodate the nuisance of the Erdoğan government’s interference and encroachment on its sovereign affairs.

US ambassador to NATO says Russia faceoff shows Turkey who its...