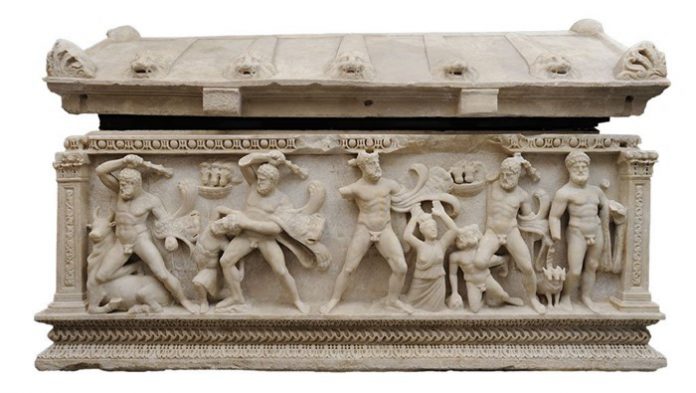 The Sarcophagus of Heracles, which was seized by Swiss authorities during an inventory check at the Port of Geneva in 2010, will be returned to Turkey on Sept. 6, state-run Anadolu news agency reported on Thursday.

The Heracles sarcophagus was smuggled out of Turkey after being found during an illegal excavation in the Aksu district of Antalya in the 1960s.

The Sarcophagus of Heracles, which is believed to have originated in the ancient city of Perge near Antalya in the second century BC, is a Roman marble sarcophagus depicting the Twelve Labors of Hercules.

It was seized at the Geneva Freeport warehouse following an inventory check. The Geneva Chief Public Prosecutor’s Office, which investigated the case, ordered the return of the Heracles sculpture to Turkey in 2015.

The decision was challenged by the Swiss Federal Court, but the appeal was withdrawn and a final decision was made in May 2016 for the return of the sarcophagus to Turkey.

The sarcophagus, which is currently in the Art and History Museum at the University of Geneva, will be exhibited at the Antalya Museum after it is returned on Sept. 6.

Turkish Minister of Culture and Tourism Numan Kurtulmuş said many historic works were smuggled out of Turkey and that they were working on their repatriation.