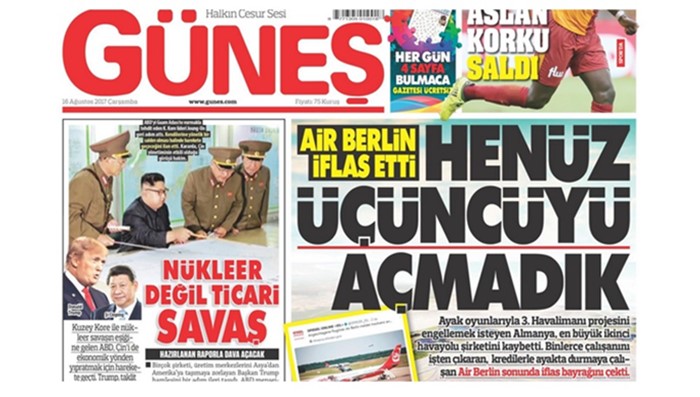 Accusing Germany of trying to prevent Turkey from constructing its third international airport in İstanbul, one of the staunchly pro-government dailies in Turkey, Güneş, on Wednesday said Germany’s airlines will go bankrupt once Turkey’s third airport is opened.

According to the report, Germany does not want Turkey to be the center of aviation in Europe and for this reason Germany’s aviation lobby is targeting the third airport project and Turkish Airlines (THY) through its media organs and official statements.

The daily said as Germany was secretly planning to destroy Turkey’s plans to construct a new airport, it lost one of its biggest airlines, which had lost some of its customers to THY and could not be saved despite government support.

According to Güneş, Germany’s Spiegel announced the bankruptcy of Air Berlin using a picture of a THY plane that was about to take off.

Despite attacks from Germany, THY is making a profit and 55 percent of construction has been completed for the third airport, said the daily, claiming that 40 million more tourists would fly to İstanbul every year after the airport is complete.