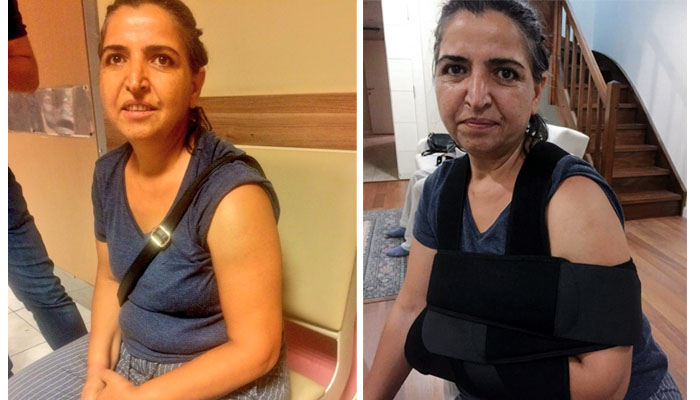 Turkish police broke the arm of Gülsüm Elvan, the mother of Berkin Elvan, who was killed during the Gezi Park protests in 2013, while detaining her during a protest on Friday in İstanbul’s Kadıköy district in support of imprisoned educators Nuriye Gülmen and Semih Özakça, who have been on a hunger strike for over 150 days.

According to the Evrensel daily, Berkin Elvan’s mother Gülsüm Elvan and sister Özge Elvan was among 16 people who were detained after a violent police intervention on Friday.

Gülsüm Elvan’s arm was broken by a police officer when she was handcuffed with her hands behind her back. She was taken to a hospital for treatment.

All sixteen people including Elvan’s mother and sister were released after they were questioned at a police station on Friday night, Evrensel said.

Berkin Elvan, a 15-year-old Turkish teenager, died in 2014 after being in a coma for 269 days induced when he was hit in the head by a tear gas canister fired by police during the Gezi Park protests in İstanbul in the summer of 2013.

Gülmen and Özakça were on a hunger strike to protest their dismissals when they were arrested on terror charges on May 23 in Ankara in the wake of a botched coup attempt on July 15, 2016. Gülmen was fired from Konya Selçuk University and Özakça was a teacher at a primary school in Turkey’s eastern province of Mardin before they were purged over ties to a “terrorist” organization.