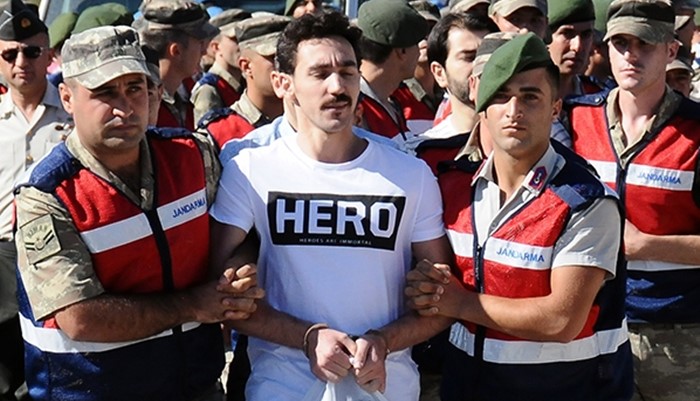 US warns Turkey against disrupting anti-ISIL mission in Syria

As part of an investigation launched after Gökhan Güçlü, a suspect on trial for an assassination attempt against President Tayyip Erdoğan on the night of a coup attempt last year, wore a “hero” T-shirt in court, legal action has been taken against Güçlü and his sister and five civil servants have been dismissed.

According to a Cumhuriyet daily report on Thursday, legal action was taken against Güçlü and his sister Bahar Güçlü, who sent the “hero” T-shirt to her brother, on charges of terrorist propaganda.

In addition, the assistant warden of the prison in which Güçlü is being held, an administrative staff member and three guards were dismissed with a decree from the Ministry of Justice.

Turkish police recently detained at least 16 people in various Turkish provinces for wearing “hero” T-shirts after Güçlü was thrown out of the courtroom on July 13 for wearing one.