Turkey’s pro-government newspapers Akşam and Star on Wednesday targeted İstanbul-based German journalist Frank Nordhausen and called him a “spy” who replaced jailed German journalist Deniz Yücel, who has been in pretrial detention in Turkey since February on charges of terrorism.

Nordhausen protested the claims by the pro-government media on his Twitter account and said: “Good morning, dear followers. Unfortunately I am getting attacked by pro gov’t media b/c I interviewed Kemal Kilicdaroglu for Focus magazine. Turkish pro gov’t media disseminate lies & absurd allegations against me. I declare: I am a journalist doing his job. Independent & critical. Unfortunately mainstream journalism in #Turkey has reached a level that is beyond all rules and concepts of our profession. Shameful.” 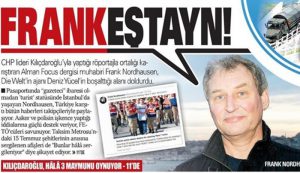 According to a Cumhuriyet daily report on Monday, the interview was published by some Turkish media groups with the headline of “CHP leader warned German tourists.”

The reports claim Nordhausen asked Kılıçdaroğlu if Germans were right to be afraid of travelling to Turkey as they might get arrested because of wearing the wrong T-shirt or making the wrong joke.

Kılıçdaroğlu responded to the question of the German journalist, saying: “Unfortunately I must establish that there is indeed such an atmosphere. I have been saying for a long time that there is currently no security guarantee for anyone in Turkey, neither for your life nor for your property. … Unfortunately we are living in an unjust period in which laws are not valid.”

Yücel, who was detained in Turkey on Feb. 14 as part of an investigation for publishing stories on the leaked emails of President Recep Tayyip Erdoğan’s son-in-law and Energy Minister Berat Albayrak, was arrested by a court on Feb. 27 on charges of terrorist propaganda and public incitement and sent to Silivri Prison in İstanbul.

Ankara’s relations with Berlin became further strained after German journalists and a human rights activist were recently jailed on terror charges in Turkey.

Turkey claims some key suspects in the perpetration of a failed coup in 2016 fled to Germany and is demanding that Berlin hand them over to the Turkish judiciary. German authorities have not responded to Ankara amid reports of torture in Turkish jails, especially in the case of coup suspects.

Erdoğan on Monday accused Germany of assisting terrorists by failing to respond to Turkey’s requests to hand over suspects wanted by Turkish authorities.