Atatürk banner not allowed into stadium in Samsun 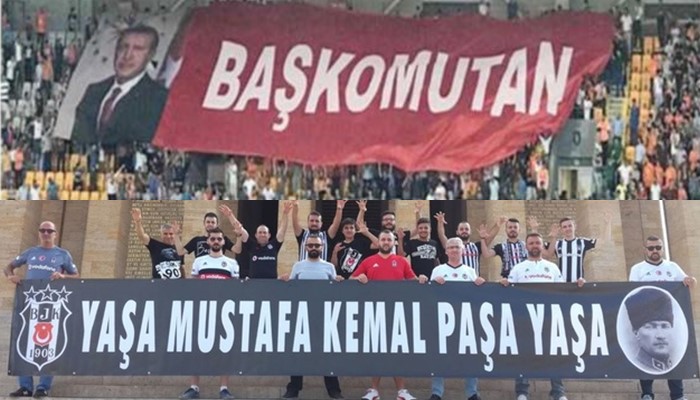 As political tension over debates on a new regime continues to rise in Turkey, a banner commemorating Atatürk, the founder of modern Turkey, was not allowed into a stadium in Samsun during a Super Cup match between Beşiktaş and Konyaspor on Sunday, CNN Türk reported.

The banner, which reads “Long live Mustafa Kemal Paşa,” was taken to Samsun by Beşiktaş fans but was not allowed into the stadium by police, reportedly for the failure to secure permission in advance. Beşiktaş fans protested the decision, saying permission has never been required for banners.

Social media users shared photos of a banner that reads “Commander-in-chief” with a photo of President Recep Tayyip Erdoğan in İstanbul’s Başakşehir Stadium on Wednesday evening during a match between Başakşehir and Club Brugge.

As part of their protest, Beşiktaş fans chanted the İzmir anthem, which was written for Atatürk, during the match in Samsun.

Political tension was heightened by a recent statement by Ayhan Oğan, a former member of the Central Decision and Administration Board (MKYK) of the ruling Justice and Development Party (AKP).

“Now we are founding a new state. Like it or not, the founding leader of this new state is Tayyip Erdoğan,” said Ayhan Oğan during a program aired by CNN Türk on Thursday evening.