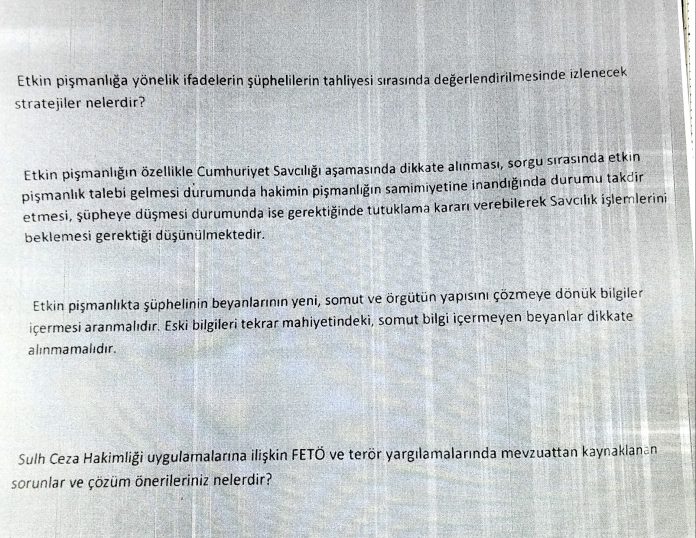 According to a document that the Kronos news website published on Saturday, Turkey’s top judicial body, the Board of Judges and Prosecutors (HSK), sent a memo to judges on how to arrest more sympathizers of the Gülen movement, which is the subject of a massive witch-hunt in the country.

Kronos claimed that the document, which bears no name or signature, was a guideline for judges who asked for criteria on the arrest of people on charges of Gülen movement links. Since a failed coup attempt on July 15 of last year, according to official figures Turkey has arrested more than 50,000 people on coup charges and links to the movement.

The news site said the six-page document encourages law enforcement to find informants who can provide concrete data on the Gülen movement.

The document lists as “evidence” of links to the movement, which is designated a terrorist organization by the Turkish government, such things as membership in charity organizations, enrollment in Gülen-linked schools, depositing money in Bank Asya and having one dollar bills. Since July 15, Turkey has arrested scores of people merely for having one-dollar bills in their homes, arguing that it is a secret code among members of the Gülen movement.

The document also claimed that women of the Gülen movement deliberately conceive to lead to their arrest immediately after delivery, a practice of Turkish government that has attracted criticism.

Turkey accuses the Gülen movement of masterminding of the botched coup attempt last year. President Recep Tayyip Erdoğan had called the failed coup a “gift from God” and accelerated the purging real and perceived sympathizers of the Gülen movement from government posts.

Assaults on journalists in Turkey are far too common, authorities should take such cases...