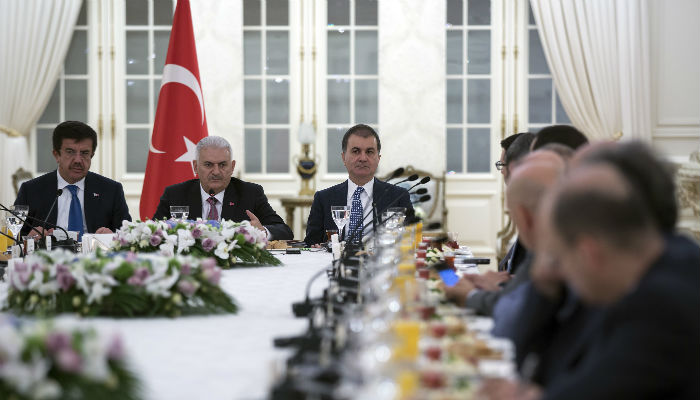 Turkish Prime Minister Binali Yıldırım has reassured the representatives of 19 German companies in Turkey, saying that he considers them not to be German but Turkish.

Yıldırım’s remarks came on Thursday in the wake of a spat between the two NATO allies following Turkey’s jailing of human rights activists, including a German national.

At a meeting with the executives of German companies at the Çankaya palace, Yıldırım said: “It is very important for us that you are not harmed in any way and are not part of this tension due to what has happened. I am saying this openly, we do not see you as German firms. We consider you to be the firms of this country.”

German officials recently warned German citizens against the risks of travelling to Turkey and threatened to cut support for German investments in Turkey.

Turkey this week dropped accusations of “terrorism” funding against nearly 700 German companies saying that Turkey’s submission to Interpol of a list of German companies suspected of funding terrorism was caused by a “communications problem.”

“There definitely is no such investigation,” Yıldırım told company executives.

According to the European Union since the implementation of the customs union agreement in 1995, the volume of trade between the EU and Turkey has quadrupled. Forty percent of Turkey’s foreign trade is with the EU, while one-third of foreign direct investment (FDI) to Turkey is from EU companies. Germany accounts for 10 percent of foreign trade, with an investment of 12 billion euros in Turkey.

Tensions have been running high between Turkey and Germany since Turkey’s crackdown on opposition groups, including journalists and human rights defenders, after a botched coup attempt on July 15, 2016. More than 150,000 people have been sacked or suspended from jobs in Turkey’s civil service, military and private sector and more than 50,000 have been jailed on coup charges.

Turkish President Erdoğan is believed to be detaining German nationals to force the deportation of Turkish asylum seekers, who Erdoğan accuses of having mounted a botched coup attempt on July 15, 2016, from Germany.