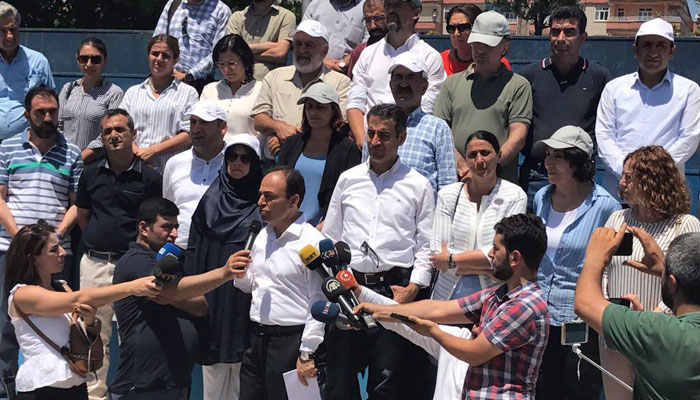 Pro-Kurdish Peoples’ Democratic Party (HDP) deputies launched a series of protests on Tuesday that will continue until Nov. 4, the anniversary of the detention of HDP Co-chair Selahattin Demirtaş along with eight other party deputies.

Holding the party’s parliamentary group meeting at a park in Diyarbakır on Tuesday, the HDP deputies launched the nationwide protests under the slogan, “We will not stop struggling. Let’s say stop, let’s stop fascism.”

Speaking during a press conference at Ekin Ceren Park, HDP spokesperson Osman Baydemir said: “Turkey has turned into an open prison. A Karbala [battle] is being waged on the HDP. If you are dedicated to being Yazid, Hitler or Franco, we are ready to be Ali, Qazi Muhammad, Seyit Rıza and Mazlum Doğan.”

“The right to vote and stand for election cannot be put in ‘prison.’ [HDP] mayors, who the people elected, cannot be replaced with government-appointed trustees. We salute all those elected [and now jailed HDP] politicians. We will not feel free until they are set free.”

Meanwhile, police set up barricades in front of the park where the HDP deputies had gathered and prevented people from joining the protest.

Demirtaş, along with HDP Co-chair Figen Yüksekdağ and seven other HDP politicians, were detained on Nov. 4, 2016 and ultimately arrested on charges of terrorism.