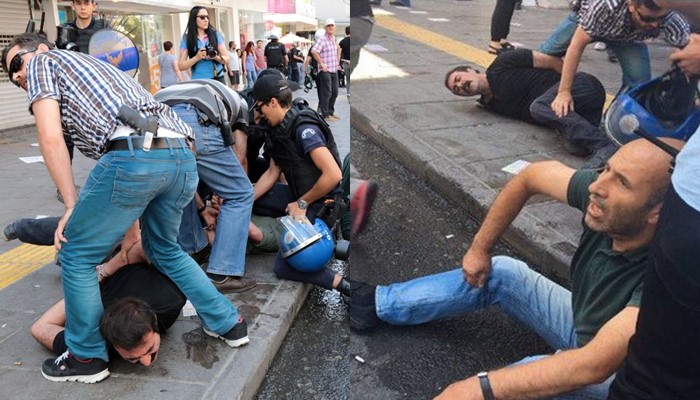 Turkish police on Sunday detained 47 people including 22 women in Ankara protesting the arrest of Nuriye Gülmen and Semih Özakça, two dismissed educators who have been on a hunger strike for 137 days, Cumhuriyet reported.

A video shows police breaking the arm of one protester while trying to take him into custody along with many others in Ankara’s Güvenpark. Police used water canon and tear gas to disperse the demonstration.

Özakça and Gülmen, who were fired by government decrees in the aftermath of a July 15 coup attempt in Turkey, were arrested by a court on the 76th of their hunger strike, on May 23.

Gülmen was dismissed from Konya Selçuk University for her alleged ties to the Gülen movement. Özakça was a teacher at a primary school in Turkey’s eastern province of Mardin before he was purged over ties to a “terrorist organization.”

Turkey has suspended or dismissed more than 150,000 judges, teachers, police and civil servants since July 15, as part of witch hunt targeting the Gülen movement, which the government accuses of masterminding the coup attempt, a claim the movement strongly denies.

A total of 7,348 people, including 302 academics, have been dismissed from state institutions by a new government decree, known as a KHK, that went into effect on July 14.