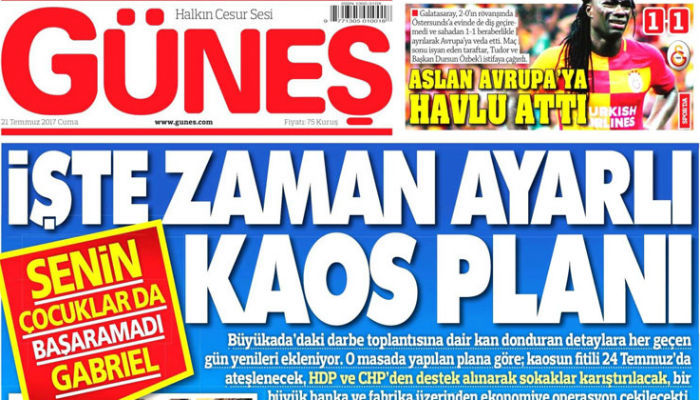 One of the staunchly pro-government dailies in Turkey, Güneş, claimed on Friday that a group of human rights activists were plotting a coup attempt when they were detained by Turkish police during a workshop on İstanbul’s Büyükada Island on July 5.

Güneş’s report claimed that a coalition of leftist parties such as the Peoples’ Democratic Party (HDP) and the Republican People’s Party (CHP), terrorist organizations and some large companies and media organizations were going to plot a coup attempt during the Büyükada meeting of the human rights defenders.

According to Güneş, the real objective of the meeting was to create chaos all over Turkey on July 24 and to target stability in the country by organizing a protest similar to the “March of Justice,” which was launched by CHP chairman Kemal Kılıçdaroğlu on June 15 in protest of the arrest of a CHP deputy.

July 24 is the date when the trial of a group of Cumhuriyet daily journalists and executives will begin.

Güneş also targeted some of the journalists and the wives of jailed journalists who were allegedly planning a provocation in front of the courthouse during the trial.

Seventeen Cumhuriyet journalists, executives and lawyers, 11 of whom have been in pre-trial detention since November, face allegations of aiding terrorist organizations.