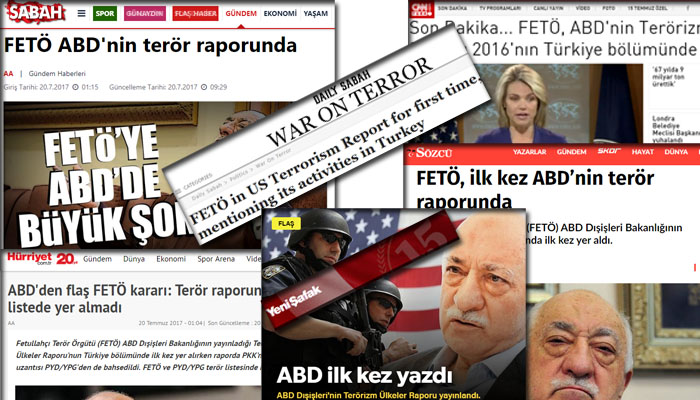 Turkey’s mainstream media, including CNN Türk, the Hürriyet daily and several pro-government media outlets, have misrepresented comments by the US State Department, implying that it referred to the Gülen movement as a terrorist organization in its “Country Reports on Terrorism 2016.”

Reporting on the US State Department’s “Country Reports on Terrorism 2016,” several Turkish media outlets, including the Hürriyet daily, the CNN Türk website, Sözcü, Sabah and Haber7, said that “FETÖ appears in the US’s terror report for the first time.”

“FETÖ,” or the “Fetullahist Terrorist Organization,” is a derogatory term coined by President Recep Tayyip Erdoğan and the ruling Justice and Development Party (AKP) to refer to the faith-based Gülen movement, a global civil society movement inspired by the views of US-based Turkish Islamic scholar Fethullah Gülen, who is accused of masterminding a failed coup in July 2016.

However, the State Department’s Bureau of Counterterrorism and Countering Violent Extremism said in its report: “Turkey’s National Security Council designated the religious movement of self-exiled Islamic cleric Fethullah Gulen a terrorist organization on May 26, referring to it as the ‘Fethullah Terrorist Organization’ (‘FETO’). The government asserts that the Gulen movement planned and led the July 15 coup attempt, which killed more than 240 people and injured more than 2,100 people, and included attacks on the Parliament. The government instituted a three-month state of emergency on July 21, subsequently extending it another three months on October 19. According to government sources, as of November 22, more than 86,000 civil servants were dismissed from public service via government-issued state of emergency decrees following the coup attempt for their alleged affiliation with, or support of, ‘FETO.’ As of October 8, authorities had arrested nearly 35,000 suspects on charges related to Gulen affiliation. The Gulf Cooperation Council designated ‘FETO’ a terrorist organization on October 13. The Organization of Islamic Cooperation did the same on October 19.”

The report also said “Turkey continued its efforts to defeat terrorist organizations, including the Kurdistan Workers’ Party [PKK] and ISIS [Islamic State in Iraq and the Levant].”

It in addition added that “Turkey is a source and transit country for foreign terrorist fighters wishing to join ISIS and other terrorist groups fighting in Syria and Iraq.”

Although the Gülen movement strongly denies having any role in the putsch, the government accuses it of having masterminded it. Gülen called for an international investigation into the coup attempt, but President Erdoğan — calling the coup attempt “a gift from God” — and the government initiated a widespread purge aimed at cleansing sympathizers of the movement from within state institutions, dehumanizing its popular figures and putting them in custody.