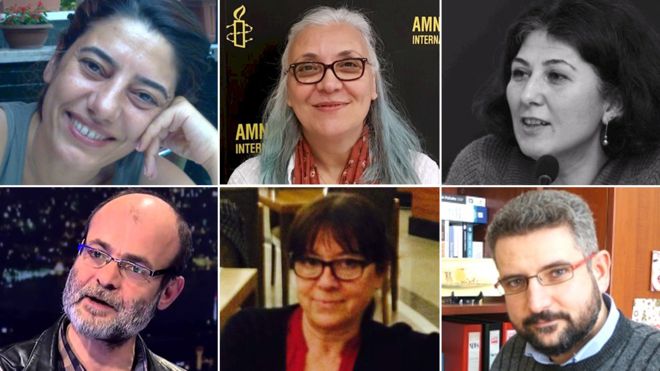 A group of human rights defenders who have been in jail since July 5 said translators who attended a meeting on İstanbul’s Büyükada Island along with the activists have said inaccurate things about the content of the meeting to legitimize the activists’ arrest, the Cumhuriyet daily reported on Wednesday.

Six human rights activists, including Amnesty International’s (AI) Turkey Director İdil Eser and German human rights consultant Peter Steudtner, who were detained on July 5 during a workshop at a hotel on Büyükada, were put in pre-trial detention by an İstanbul court on July 18.

According to the activists, the testimonies of the translators who attended the Büyükada meeting as witnesses and secret witnesses caused their arrest.

One of the secret witnesses, whose testimony was used as grounds for the arrest of the activists by public prosecutor Can Tuncay, claimed that there was a discussion about encryption during the meeting and that one of the participants of the meeting said in the event the computer of one of the workshop participants was seized by the police, a lot of people would be in trouble.

According to the witness, the activists were concerned about the police seizing their electronic devices.

The moderator of the workshop, Swedish national Ali Gharavi, who was also arrested, said the translators at the meeting were translating by adding things he did not say and that they were being provocative.

“The person who asked questions during breaks about police not locating [computers] is the translator who attended the meeting on the second day. He/she asked questions not related to the meeting such as how to access illegal websites like tor,” Gharavi said.

Günal Kurşun from the Human Rights Agenda Association, who was also jailed, said secret  witnesses were giving wrong information about what was discussed at the meeting.

“I believe this person [one of the secret witnesses] was assigned as an agent provocateur. There was no talk about many people getting in trouble if the computers of the association were seized by the police. This is a total fabrication by the secret witness,” he said.

Speaking during a press conference in London, Dalhuisen said: “Too many Western governments have been locked in a fatal embrace with the Turkish government at the moment it slides into an authoritarian direction. Everyone knows this is happening in Turkey, and it needs to be said. These arrests represent a red line, and must be the moment when the terms of engagement with Turkey are reset.”