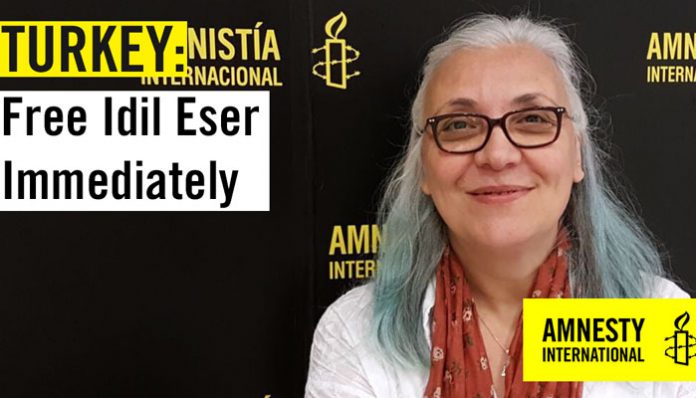 Six human rights activists, including Amnesty International’s (AI) Turkey director İdil Eser, who were detained on July 5 during a workshop at a hotel on İstanbul’s Büyükada, were put in pre-trial arrest by an İstanbul court on Tuesday.

Turkish police, acting on an anonymous tip, raided a hotel on Büyükada, one of the Princes’ Islands off İstanbul, and detained Eser from AI, İlknur Üstün from the Women’s Coalition, lawyer Günal Kurşun from the Human Rights Agenda Association, lawyer Nalan Erkem from the Citizens Assembly, Nejat Taştan from the Equal Rights Watch Association, Özlem Dalkıran from the Citizens’ Assembly, lawyer Şeyhmuz Özbekli, and Veli Acu from the Human Rights Agenda Association. Two foreign trainers — a German and a Swedish national — as well as the hotel owner, who was later released, were among the detainees.

After being interrogated at the anti-terror branch of the İstanbul Police Department on the 12th day of their detention, 10 human rights defenders who are accused of membership in a terrorist organization were referred to the İstanbul Courthouse in Çağlayan on Monday morning. Six of the human rights activists were subsequently arrested while the court decided to release four of them on judicial probation.

The court overseeing their case ruled to arrest Eser along with five other activists: Dalkıran, Acu, Kurşun, trainees Ali Garawi and Peter Steudtner. The accusation leveled against them was “abetting a terrorist organization.”

AI Secretary-General Salil Shetty harshly criticized the decision and asked leaders around the world to “bring pressure to bear on Turkish authorities to drop these spurious charges and to immediately and unconditionally release the rights defenders,” in a statement he made on Tuesday.

Expressing his concern about the current situation of justice in Turkey, Shelly said: “The decision to proceed shows that truth and justice have become total strangers in Turkey.”

“Today we have learnt that standing up for human rights has become a crime in Turkey. This is a moment of truth, for Turkey and for the international community,” added Shetty.

Turkish President Recep Tayyip Erdoğan accused the human rights defenders of plotting a follow-up to a July 15, 2016 coup attempt during a press conference on July 8.

Taner Kılıç, a lawyer and chairman of AI’s Turkey’s board, was earlier arrested on June 9, accused of links to the alleged mastermind of a failed coup attempt on July 15, 2016, Fethullah Gülen, who has denied any involvement.