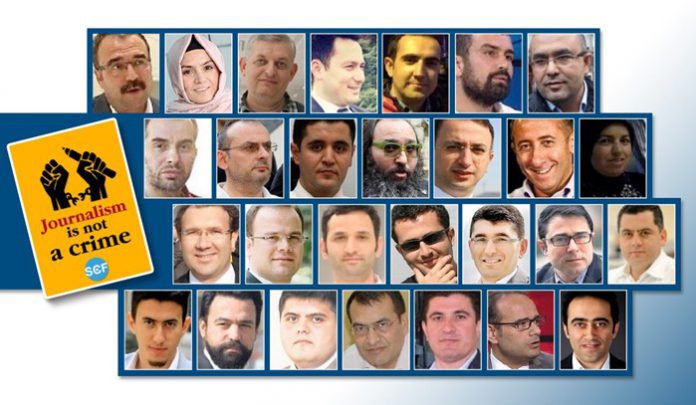 A recently released quarterly report, the BIA Media Monitoring Report, has revealed that 136 journalists were in Turkish jails as of July 1 while 301 journalists are facing 142 aggravated life sentences on various charges, the Cumhuriyet daily has reported.

The journalists are accused of such crimes as “taking part in a coup attempt,” “membership in a terrorist organization,” “disseminating terrorist propaganda,” “insulting the Turkish president” and “insulting state organs.”

According to the BIA Media Monitoring Report, 78 of the arrested journalists used to work for media outlets affiliated with the faith-based Gülen movement, accused by the Turkish government of masterminding a coup attempt on July, 2016, and 30 of them used to work for Kurdish media outlets. Eleven of the jailed journalists worked for the critical Cumhuriyet daily and nine were jailed on charges of membership in an illegal organization or making terrorist propaganda.

Out of the 136 jailed journalists, 84 of them are either still under investigation or an indictment in their cases has just been filed. Nineteen of them have been convicted and 23 are still being prosecuted.

Thirty-two journalists were in prison during the same period in 2016. Half of them were convicted, five were being prosecuted and 11 were under investigation.