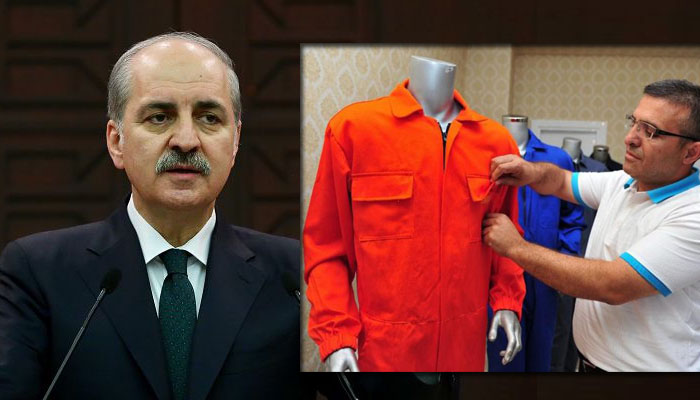 Turkish Deputy Prime Minister Numan Kurtulmuş said on Monday that Justice Ministry officials are working to design a special uniform for suspects who are allegedly linked with the faith-based Gülen movement and accused of attempting to stage a coup in July 2016 to wear during court hearings.

Speaking to reporters following a Cabinet meeting on Monday, Kurtulmuş said: “Our [Justice] Ministry is working on it. There is a high demand from the public. Court hearings are open to the public, so it is more appropriate to bring suspects before the court in uniforms.”

One of the suspects on trial for an assassination attempt against President Recep Tayyip Erdoğan on the night of July 15 2016 was thrown out of the courtroom for wearing a T-shirt bearing the word “hero” because it caused tension between the parties during the hearing.

Mustafa Doğan İnal, a lawyer representing Erdoğan, asked the suspect, former master sergeant Gökhan Güçlü, to stand up during the hearing.
“Suspect Gökhan Güçlü came to the courtroom wearing a ‘kahraman’ [hero in Turkish] T-shirt. There are no heroes here. This is a challenge against the government,” İnal said and demanded that he take the T-shirt off.

After a quarrel between the lawyers, presiding judge Emirşah Baştoğ called a recess and asked everyone to leave the courtroom.

Demanding that Güçlü change his shirt, the prosecutor for the case said the word on the T-shirt sent a certain message and disturbed the discipline of the hearing.

Baştoğ ruled that the suspect should be brought to the courtroom after changing his T-shirt on the grounds that it “led to arguments and disturbed the atmosphere of the hearing.”
Güçlü, who said he did not want to attend the hearing, was sent back to prison.

With regard to the “hero” T-shirt issue, Erdoğan said: “We recently spoke to Mr. Prime Minister. They should wear uniforms like they do at Guantanamo [prison] when going to court.”

On Saturday, a textile manufacturer told CNN Türk that he is willing to donate 50,000 jumpsuits that he designed for people jailed over links to the Gülen movement across the country. Orange color jumpsuits resemble prison uniforms that are used in the United States and the Guantanamo prison.