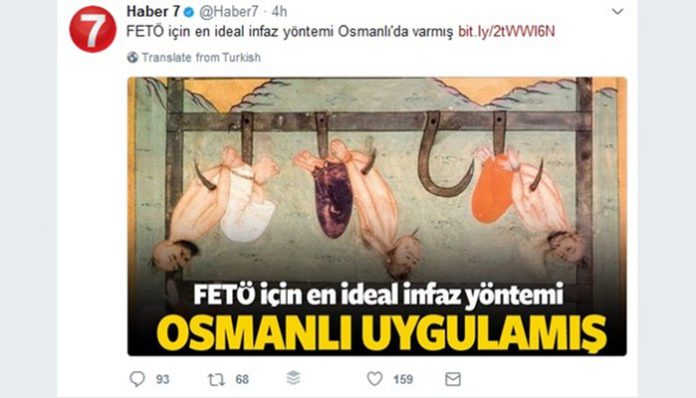 Following President Recep Tayyip Erdoğan’s promise “to cut off traitors’ heads,” the pro-government media called for an Ottoman-like solution for the execution of people linked to the Gülen movement, which Erdoğan accuses of masterminding a coup attempt in Turkey on July 15, 2016.

“This is an example of execution in the days where decisions were taken without losing time on investigations, interrogations and court procedures for people who rebelled against the state,” said news website Haber7 in a tweet on Sunday posted with a headline reading “The ideal execution method for FETÖ [a derogatory term coined by Erdoğan and the ruling Justice and Development Party (AKP) government to refer to members of the Gülen movement] was used by the Ottomans” along with an Ottoman miniature depicting the execution of people hung by hooks in their stomachs.

The social media message came a day after Erdoğan targeted people linked to the Gülen movement while speaking to a crowd of thousands at the July 15 Martyrs’ Bridge on the anniversary of the failed coup attempt.

“We’re not just some nomadic tribe, we are a nation. They, however, are a disease, disease. That’s the difference,” said Erdoğan.

“First we will cut off traitors’ heads,” said Erdoğan while underlining that there were other powers behind the movement.

With regard to a coup suspect who appeared before a judge with a T-shirt reading “Hero” in English last week, Erdoğan said: “We recently spoke to Mr. Prime Minister. They should wear uniforms like they do at Guantanamo [prison] when going to court.”