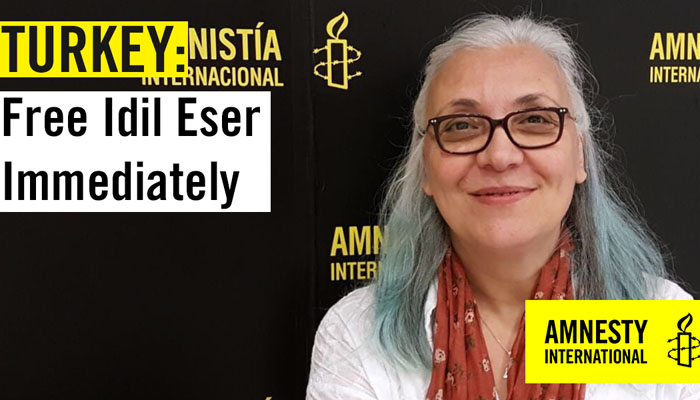 Amnesty International (AI) Turkey Director İdil Eser, who was detained on July 5 in İstanbul with seven other human rights defenders, has said in a letter that “everybody will need justice one day,” the Diken news website reported on Thursday.

Describing her situation as too absurd to be true, Eser wrote in her letter: “I have not committed any crime other than defending human rights without looking at victims’ identities. Everybody will need human rights, law and justice one day. I found myself in unlawfulness, in a nightmare that is too absurd even for Aziz Nesin [a Turkish satirist and writer] to imagine, but I am at peace due to standing up for human rights and what is right. I want to believe that before this surreal picture turns into a lynching atmosphere, the truth will come out, that law and justice will prevail and that I will continue my work where I left off.”

Eser, who started working for AI Turkey a year ago, said she was working there so that nobody would have to experience the legal absurdity that she is experiencing.

“The reason I wanted to work at this job was because I knew the end of countries that showed no respect for human rights from examples throughout history and believed in the significance of working for rights,” said Eser.

The detention of the human rights activists, who have been in custody since July 5 and would normally have remained so for only seven days, was extended for another week on July 11.

The activists are accused of membership in a terrorist organization.

They are also accused by President Recep Tayyip Erdoğan and pro-government media of plotting a follow-up to a July 15, 2016 coup attempt in Turkey.