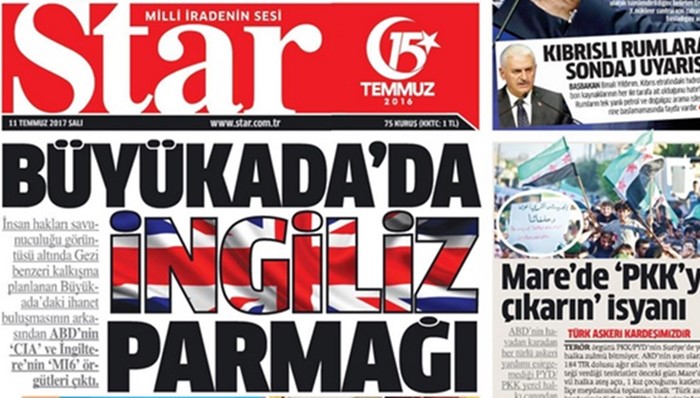 One of the staunchly pro-government dailies in Turkey, Star claimed on Tuesday that the CIA and MI6 were behind an Amnesty International meeting at a hotel on İstanbul’s Büyükada, the attendees of which were detained by Turkish police last Wednesday.

Star’s report was based on the statements of ruling Justice and Development Party Erzurum deputy Orhan Deligöz, who accused the human rights activists of planning to divide Turkey in four meetings at the same hotel after a failed coup attempt last July.

“The last meeting was held in an illegal and secret room in the back part of the hotel with the attendance of nine Turks and two foreigners, 11 people in total. We know that these meetings were controlled and guided by the US’s CIA and Britain’s MI6 agents,” said Deligöz.

According to the report, the human rights defenders were found discussing a Turkish map when they were detained and were planning a second “Gezi protest,” which was sparked in the summer of 2013 in protest of government plans to demolish Gezi Park in İstanbul’s Taksim neighborhood, after the completion of a “March of Justice” by the Republican People’s Party (CHP) leader, who walked from Ankara to İstanbul to protest the arrest of a CHP deputy.

Deligöz claimed that one of the activists was part of the faith-based Gülen movement, labeled by the Turkish government as the mastermind of a failed coup attempt on July 15, 2016, a claim the movement denies.

“They call themselves human rights activists. These people are the ones who were trying to destroy the Turkish Republic’s territorial integrity during the Gezi Park protests. There is someone among them in particular, he is the academic hitman of FETÖ [a derogatory term used by government circles to refer to the Gülen movement]. This hitman is Assistant Professor Günal Kurşun from the Çukurova University law faculty, who first reacted when FETÖ/PDY [Parallel State Structure] was listed red and who wrote for Today’s Zaman [a closed pro-Gülen daily]. He was later dismissed from Çukurova University,” said Deligöz.

Turkish President Recep Tayyip Erdoğan accused the recently detained human rights defenders of plotting a follow-up to the July 15, 2016 coup attempt during a press conference in Hamburg on Saturday and signaled that the detention of the rights defenders could turn into imprisonment.

Amnesty International, the Parliamentary Assembly of the Council of Europe (PACE), Human Rights Watch and the United States have called on the Turkish government to release the detained human rights defenders.