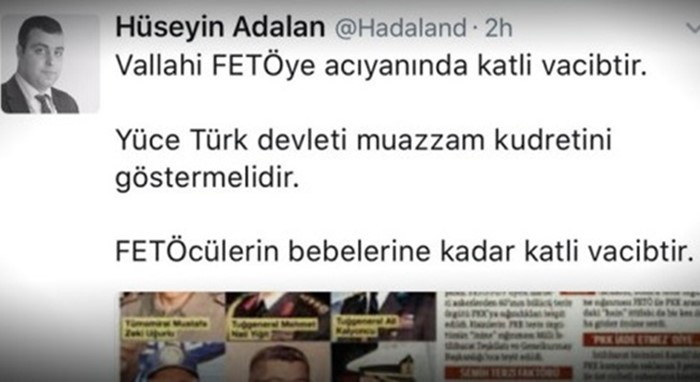 Hüseyin Adalan, a columnist for the pro-government Milat and Yenisöz newspapers, has tweeted that killing people affiliated with Turkey’s Gülen movement is a “religious obligation for the Turkish state,” the Haberdar daily reported.

“The honorable Turkish state needs to reveal its power. Killing FETÖ members is a religious obligation,” Adalan said in a tweet posted several days ago.

“FETÖ” is a term coined by the Justice and Development Party (AKP) government and President Recep Tayyip Erdoğan to refer to members of the Gülen movement.

The military coup attempt on July 15 killed over 240 people and wounded more than a thousand others. Immediately after the putsch, the Justice and Development Party (AKP) government along with President Erdoğan pinned the blame on the Gülen movement.

Turkish Justice Minister Bekir Bozdağ said on Friday that since a failed coup attempt last July, 50,504 people have been arrested and 168,801 are the subject of legal proceedings for their alleged involvement in the organization of the coup, the Diken news website reported.

Rebecca Harms, a member of the Greens/EFA group in the European Parliament, said on Thursday that the European Court of Human Rights (ECtHR) should take the necessary action to stop countries from extraditing Gülen followers to Turkey.

Speaking during the general assembly of the European Parliament (EP) on Thursday, Harms said working in institutions such as schools or universities with links to the Gülen movement is not a crime and that, similarly, being critical of the government and being a critical journalist are not crimes.

“It is important for me as a German member of the European Parliament because my country caused Europe to have this bad experience,” she said. (Turkey Purge)